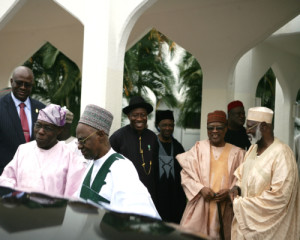 Former Nigerian leaders, including General Yakubu Gowon, Alhaji Shehu Shagari, Olusegun Obasanjo, Ibrahim Babangida, Ernest Shonekan and others have been convinced that the security operatives have found the whereabouts of the female students of Government Girls Secondary School, Chibok in Borno state who were abducted in April by members of Boko Haram.
The leaders, who converged on the Presidential Aso Villa, Abuja today, to meet with President Goodluck Jonathan under the aegis of National Council of State, also agreed that President Jonathan is on top of the sordid security situation in the country.
Breifing newsmen shortly after the meeting, the governors of Akwa Ibom state, Godswill Akpabio, Edo state, Adams Oshiomhole and Kaduna state, Lamaran Yero said that the meeting started with President Jonathan briefing the leaders on the measures he had so far taken to address the worsening security situation, particularly the abducted Chibok female students.
They said that the National Security Adviser (NSA), Colonel Dasuki (rtd) also briefed the leaders, upon which the former Nigerian Presidents and Heads of States in attendant expressed satisfaction.
“We are satisfied that security people know where the girls are right now and have to be meticulous in bringing them from their captors in a way that none of them would be killed in the process.
“We are satisfied that the military authority and other security agents are on top of the situation.”
The leaders then asked Nigerians to be patient with President Jonathan and the security people to continue with their good work to bring back the girls and bring Nigeria back to the path of peace and unity.
They made it clear that terrorism involving suicide bombing is a new security phenomena which the nation’s conventional security people were not used to, saying that such war in which there is no defined enemies is difficult to fight.
The leaders also appealed to news media not to celebrate terrorism even as they also called on the politicians avoid partisanship in the type of security challenges in the nation is going through.
The leaders who attended today’s Council of State meeting were the former Heads of State, Generals Yakubu Gowon, Ibrahim Babangida and Abdulsalami Abubakar, former head of the National Interim Government, Chief Ernest Shenekan as well as former Presidents Shehu Shagari and Olusegun Obasanjo.
Former Head of State General Muhammadu Buhari (Rtd) is conspicuously absent at the meeting.
The governors at the meeting include Murtala Nyako of Adamawa state, that of
Bayelsa, Delta, Enugu, Abia, Ebonyi, Taraba, Edo, Akwa Ibom, Gombe, Kebbi, Kaduna, Cross River, Niger and
Kogi states.
Vice President Mohammed Namadi Sambo as well as Senate President, David Mark and Speaker of the House of Representatives, Aminu Tambuwal were also in attendance.‬