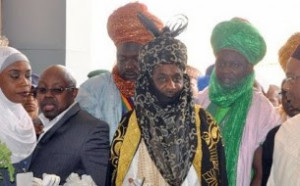 There seems to be confusion in Kano as Governor Rabiu Musa Kwankwaso announced, through the Secretary to the State Government (SSG), the name of the former Governor of the Central Bank of Nigeria (CBN), Sanusi Lamido Sanusi as the new Emir of Kano, aside from the earlier name of the late Ado Bayero’s eldest son, Sanusi Ado Bayero.

Shortly before the announcement of Sanusi Lamido Sanusi as the new Emir after the death, on Friday of Alhaji Ado Bayero, security was placed on red alert.

Sources at the government House Kano alleged that the earlier announcement of Sanusi Ado Bayero was made by Peoples Democratic Party (PDP) even before the government came out with its position.

Governor Kwankwaso had, yesterday, addressed  reporters shortly after a visit by the Kano four kingmakers to his office, saying that barring any last-minute change in plan, the new Emir would emerge on Sunday.

Kwankwaso, flanked by the kingmakers, refused further inquiries on the succession race, stressing that the state government was set to announce the Emir.

“The kingmakers, led by their Chairman, are here to condole with me over the death of our Emir and, want to assure you that we would announce the new Emir on Sunday.”

It was learnt that the Kingmakers submitted their shortlist of  four candidates, two each from the Sanusi dynasty and  the Alhaji Ado Ruling House to the governor.

The kingmakers were also said to have recommended the son of the late Emir, who also doubles as the Ciroman Kano, to succeed his late father, stressing that the choice remains a stabilising factor for now.

The kingmakers were said to have told Governor Kwankwaso that their nominee remained  the only choice to  assuage the restive populace as the governor’s quarrel with the late Emir depressed him .

They were said to have told the governor: “we carefully assessed the situation and believe that the only way to avoid crisis is to honour the late Emir with appointment of his successor.”

As at the time of filing in this report, the Ciroman Kano, Alhaji Sanusi Ado Bayero, whose name was earlier announced as the new Emir, was at the palace receiving guests as it became obvious that his brothers have stepped down for him. [myad]