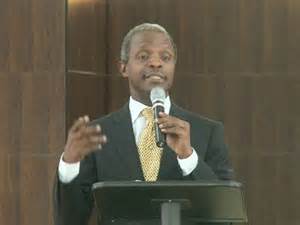 The Vice Presidential candidate of All Progressives Congress (APC), Professor Yemi Osinbajo has described Nigeria as an abnormal country as a result of corruption that has held it down for a long time.
“We have to deal with corruption very seriously. This is an abnormal country. It is only in an abnormal country that the Central Bank will, by own admission, accept that USD 10 billion is missing and 400,000 barrels of crude oil is stolen and nothing has been done about that.”
At a parley with health care professionals under the auspices of the Health Care Federation of Nigeria today in Lagos, the APC Vice Presidential hopeful made it clear that until corruption is tackled frontally, Nigeria would not be able to move forward.
Professor Osinbajo said that the APC to be led by General Muhammadu Buhari, would spare nothing in bringing what he called “systemic corruption” to an end, emphasizing that the country’s problems would be solved only after dealing with corruption, which he said, is now the order of the day.
He announced that APC would run free education that would, in addition to being available at primary and secondary school levels, also be extended to tertiary levels but limited to science, technology, Engineering, Mathematics and Education.
Professor said that the party had made adequate plans to make sure that the National Economic Council which comes under the Vice Presidency is a vibrant body in line with the the constitution.
The Director of Media and publicity of the APC Presidential Campaign organization, Garba Shehu, quoted Professor Osinbajo as saying that the incoming APC government will partner with the private sector in the Healthcare sector and in other sectors of the economy.
He said that APC government will ensure the lowering of the cost of funds to provide easy access to capital and will address the crisis in the power sector amongst others. [myad]