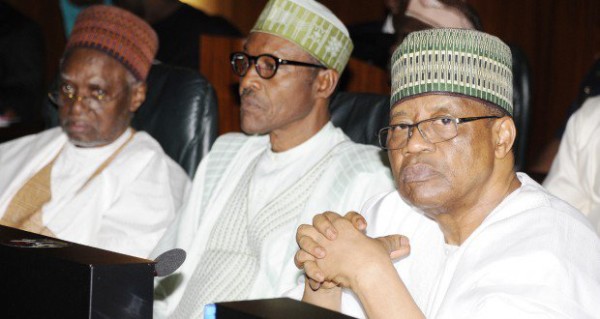 The Nigerian National Council of State rose from about seven-hour meeting at the Presidential Aso Villa today, avoiding a situation where it would dictate to Independent National Electoral Commission (INEC) whether or not it should hold the general elections as scheduled, on February 14 and 28. This is even as the electoral body has scheduled a meeting with all its Commissioners, the 36 State Electoral Commissioners and that of the nation’s Federal Capital Territory (FCT), Abuja before taking the final decision.

Briefing newsmen today after the Council of State meeting, attended by President Goodluck Jonathan, former military President, Ibrahim Babangida, former Head of State and Presidential candidate of the opposition All Progressives Congress (APC), General Muhammadu Buhari, all the governors of Peoples Democratic Party (PDP) and APC as well as other leaders, governors Rochas Okorocha of Imo state and Olusegun Mimiko of Ondo state said that the Council did not tamper much with the February 14 and 28 for the election.

Though governor Okorocha said that INEC had been advised by the council to perform its civic responsibility with regards to this month’s elections even as governor Mimiko said that INEC was advised by the council to embark on consultations with stakeholders and see if it is possible to go ahead with the election or not, it still stands that the electoral body has been thrown the challenge of independently coming up with the final say on this.

Shortly after the Council of State meeting, INEC chairman, Professor Attahiru Jega announced that he would hold a meeting on, Friday, with the national electoral commissioners and another one with the Resident Electoral Commissioners (RECs) from the 36 states and the Federal Capital Territory on Saturday.
The aim of the two meetings is to enable the INEC chairman to brief the national commissioners on the outcome of the National Council of States meeting and on Saturday hear the situation of things on ground from the Resident Electoral Commissioners before coming out with a clear position on the general elections.
The meeting with the Resident Commissioners will be for an on the spot assessment of the distribution of the Permanent Voter Cards (PVCs).
According to National Commissioner, so far, only over 45 million PVCS have been distributed. So the meetings will assess everything before a final decision.
It was gathered that there may be a stakeholders’ meeting with political parties on Monday before a final decision is taken. [myad]