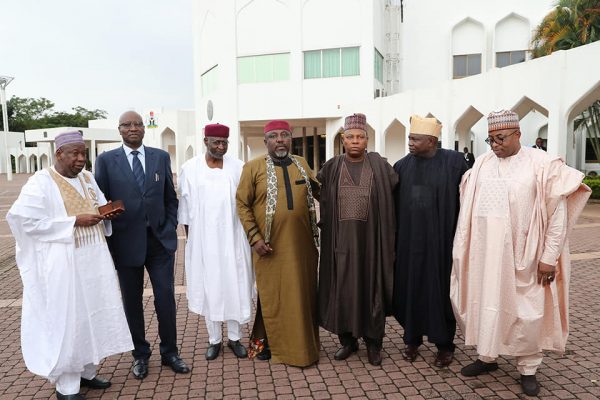 Governors on the platform of the ruling All Progressives Congress (APC), today, Wednesday, stormed the Aso Rock Presidential Villa, Abuja, to ask President Muhammadu Buhari to intervene in the crises that have been festering in some States arising from the recent primary elections held in those states.

The APC governor, led by their chairman and Imo State governor, Rochas Okorocha, drew the attention of the President to the importance of personally intervening in the crises in view of the fast approaching general elections in 2019.

The governor, after more than an hour closed door meeting with President Buhari, told news men that they looked at issues concerning the primaries in States.

“In every democracy, one should expect some kind of disagreements and we have kindly requested that something be done to bring all warring factions together so that we can have a united party to face the challenges ahead.

“We are happy that the issue will soon take place. Most of the problems have been resolved except for one or two states where we have issues. Where it becomes more difficult, we asked  for Mr. President’s intervention in the matter.

“Our election this time, we will not engage in castigations. We will be talking on issues. Nigerians are tired of political abuses. What we want to be talking about are issues and track records of people involved in our elections.

“Nigerians are very wise now. Before they elect anybody, they will ask questions: what has been your track records, who were you before and who you are now and everything about you. For that reason, we are confident that in 2019, APC will pull through.”

Okorocha said that the governor also used the opportunity to congratulate the President for having emerged as the presidential candidate of APC in the 2019 election.

He said that the governors believed that it was a victory well deserved, adding that they reaffirmed their confidence in the President.

“We have come to request from Mr. President for a date for governors to come together with our followers and supporters to further inform the world of our readiness to deliver him in the 2019 election. This basically is the message we have come and to say that Mr President is more than ever ready for the entire exercise.”