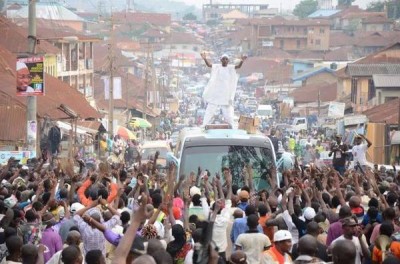 The victorious governor of Osun state in the Saturday governorship election in the state, Rauf Aregbesola has noted that despite his victory, democracy is still gravely endangered in Nigeria even as President Goodluck Jonathan denied insinuation in opposition quarters that the security and other arrangements made for the election were designs to achieve a favourable outcome for his Peoples Democratic Party (PDP).

In his post-election victory broadcast on Sunday in a broadcast to the people of the state, shortly after the Independent National Electoral Commission (INEC) announced him as the winner of the governorship election, titled: “Democratic Victory Over Tyranysaid: Governor Aregbesola: “it is so sad and unfortunate that what should be a normal, routine process was maliciously allowed to snowball into a needless virtual war by the Federal Government and the PDP. We witnessed gross abuse of power and, of due process before, during, and even after the actual voting process.

“After an unnecessarily tense, tortuous and even traumatic process, the Independent National Electoral Commission this morning declared me as the winner of the Osun state.”

Here is the full text of the broadcast text:

To the good people of Osun State goes our unflinching gratitude. We salute your steadfastness, courage, loyalty, commitment and fierce determination to defend your sovereign rights and the integrity of our nascent democracy. You have demonstrated in this election that in a democracy, power truly belongs to the people. I am humbled and honoured by your trust and abiding faith in me and my party. I pledge that your confidence in us shall never be betrayed or taken for granted.

Ordinarily, this should be a moment of joy and celebration consequent upon the hard earned triumph of the people’s will. However, this election shows that democracy is still gravely endangered in Nigeria. We witnessed gross abuse of power and, of due process before, during, and even after the actual voting process. It is so sad and unfortunate that what should be a normal, routine process was maliciously allowed to snowball in to a needless virtual war by the Federal Government and the PDP.

Osun state was unduly militarized in an unprecedented manner through criminal intimidation and psychological assault on our people. This election witnessed an abuse of our security agencies and amounted to a corruption of their professional ethics and integrity.

The security agencies were unprofessionally utilized in Osun state to harass, intimidate and oppress the people whose taxes are used to pay their salaries and provide their arms. Hundreds of leaders, supporters, sympathizers and agents of our party were arrested and detained. Also, hundreds of other innocent citizens including women and the aged were harassed, brutalized and traumatized. In spite of this condemnable repression and abuse of human rights, the unflagging spirit of our people triumphed.

Our victory is due to the steadfastness and resolute determination of our people to assert and defend their rights. The PDP obviously did all it could in a most desperate manner to steal the people’s mandate. A critical analysis of the elections shows a trend of general low voter turnout largely because of the atmosphere of deliberate tyranny and fear caused by the excessive militarization of the state. Despite our victory, it is pertinent to condemn and also point out the fact that the number of accredited voters in most local governments was less than half of registered voters. Against this trend, it is curious that the bulk of the PDP candidate’s votes came from only four Local Governments- namely Ife Central, Ife East, Ife North and Ife South. This suggests an inexplicable large turnout in his stronghold which is a curious departure from the general trend of voting across the state.

The outcome of this election, once again, shows the unswerving determination of our people to ensure that democracy triumphs in Nigeria. We have sent a strong signal to all and sundry that no might is powerful enough to thwart the will of the people. This should always strengthen our resolve to ensure that as from now on, every vote must not only be counted but must count in this country. Nobody or party must ever exercise power unreasonably at any level except in accordance with the will of the people to whom sovereignty belongs.

Let me assure the good people of Osun state that I appreciate that this victory is a reward for our hard work and commitment to the welfare of our people. I promise that we shall not rest on our oars but shall be spurred to work even harder with all well-meaning people of the State of Osun and the generality of Nigerians to continue to enjoy your trust and support. You can be assured that we will leave no stone unturned in our continued effort to transform Osun into a land of progress, prosperity and peace for all with renewed fervour. I realize that this victory and the challenges we went through is a call to greater service and sustained commitment to our people. I pledge a rededication of myself to the service of our people and the strengthening of democratic values in Osun and Nigeria generally. Our country remains in political bondage and we must set her free.”

In a message to congratulate Governor Aregbesola President Jonathan described the Saturday governorship election as election free, fair and peaceful, adding that it reaffirmed his administration’s determination to positively reform Nigeria’s electoral processes.
“The outcome of the election has also given the lie to the false, unfair and uncharitable allegations that measures put in place by the federal government for the Ekiti and Osun State elections were partisan and designed to achieve a favourable outcome for his party.”
He hailed the Independent National Electoral Commission and national security agencies for ensuring that the elections were free, fair, credible and peaceful in keeping with the avowed commitment of his Administration.
President Jonathan also applauded the people of Osun State who came out en masse in all the local government areas of the state to peacefully and freely exercise their democratic right.
Giving further assurance that he would take all necessary measures to ensure the safety and the sanctity of the Nigerian votes at all elections, the President assured governor Aregbesola that he would continue to work with him and other state governors to further improve the living conditions of Nigerians in Osun and other states of the country.
He wished Aregbesola continued good health and a successful second term in office.
In his congratulatory message to the governor-elect, former Nigeria’s Vice President, Atiku Abubakar described the electoral victory of Ogbeni Rauf Aregbesola as a measure of the his popularity and acceptability and that of the opposition party.
The former Vice President expressed appreciation to the voters in Osun State for not letting him down as their in-law.
“The victory of Governor Aregbesola and the APC in the governorship election in Osun State is very symbolic. It shows clearly that my in-law and the incumbent governor is very popular among his people of Osun State.
“It also shows significantly that the people of Osun State are at home with the APC and the mass oriented policies associated with our great party.”
Atiku said that in as much as the election has been won and lost, what is important is that the people of Osun State have made an investment into the future for another four years.
“Our great party, the APC is very appreciative of the decision that the people have made and I am very confident that Governor Aregbesola will initiate more people-friendly policies that will make the APC come out stronger in future elections in the state and beyond.”
The Rivers State chapter of APC also sent its congratulatory messages, saying that with the victory of Governor Rauf Aregbesola and with the defeat of the Peoples Democratic Party (PDP) in its attempted coup against the popular Nasarawa Governor, Alhaji Tanko Al-Makura, the days of PDP at the centre have become obviously numbered.
“In view of the failure of all the plots to rig the Osun election; intimidation and arrest of key APC Chieftains by the PDP-induced security agents and with the failure of the attempt to corrupt INEC officials, PDP should hide its ugly face in shame. We heartily congratulate Governor Aregbesola on this epochal victory.
“With all of PDP’s rigging strategies now exposed, President Goodluck Jonathan should do himself some good by resisting the temptation to lure him into the 2015 presidential election. “This is necessary if he is to avoid open disgrace by becoming the first President in Nigeria to contest an election and lose such an election. Besides, Mr. President is fully aware that he is not qualified to contest the 2015 election after spending six years as President. Already, Nigerians have vowed to disgrace PDP for the hardship the party has brought upon them apart from not securing their lives.”
APC said that the Osun
election was, in a way, a victory for River State, adding that it was also a victory for Governor Chibuike Rotimi Amaechi who directed that the mistake of Ekiti State should not be allowed to play out in Osun.
“In this regard, Dr Davies Ikanya the Rivers State APC Chairman who relocated his office to Osogbo for over a week to represent the Rivers State Government and to ensure the execution of the election according to the wishes of Governor Amaechi described the election as victory over fascism and nepotism represented by PDP.” [myad]