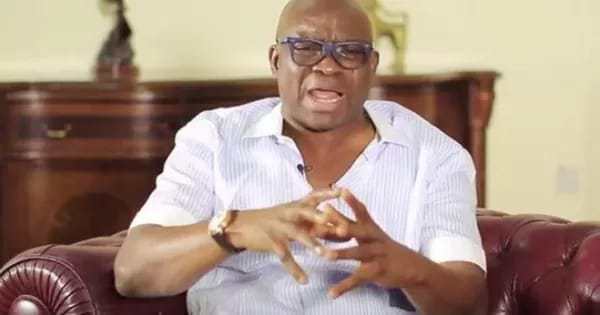 Governor Ayodelel Fayose has warned against people coming to oppress Ekiti people with federal might.

Commenting on the shooting at the rally of the All Progressives Congress (APC) in which former governorship aspirant, Michael Opeyemi Bamidele and others were hit by bullets fired by a policeman, the governor remarked: “we must all shun violence and stop this mindset of coming to oppress the people of Ekiti with federal might. Those planning violence must be mindful of the fact that one can only know the beginning of violence, not the end.”

Fayose, who asked that  the perpetrators of the shootings must be brought to book, said: “the matter must not be swept under the carpet just because those involved are APC chieftains.”

He called for three days of fasting and prayer for the victims of the shooting, especially, Opeyemi Bamidele even as he directed the suspension of all open campaign activities of the Peoples Democratic Party (PDP) in the State for three days.

Governor Fayose said even though he was glad that Opeyemi Bamidele was responding to treatment, it was necessary that Ekiti people should support him and others with prayers.

“Our doctors can only try; it is only God that heals. Therefore, it is important at this point for all of us in Ekiti to go to God in prayers so that He can heal our brother and friend, Opeyemi Bamidele and others who sustained injuries on Friday.

“At this point, it is immaterial the political party that he belongs to, what is important is the life of an Ekiti son and I pray that God will touch Opeyemi Bamidele with His healing hands.

“Most importantly, Opeyemi Bamidele is a man that I have great respect for and since he has now been airlifted out of Ekiti for further treatment elsewhere, all we can do is to pray for him.”