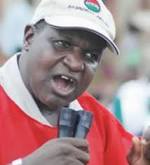 President of the Nigeria Labour Congress (NLC), Comrade Abduwahed Omar has warned against turning Osun state, currently witnessing the election of the next governor, into a war zone. He feels worried over the deployment of armed security men and women to the State as part of preparations ahead of the election.

In a statement, Comrade Omar said believed that deployment of armed soldiers to election venue cannot be helpful to the growth of any democratic culture, saying that it portends an infringement on the rights of the electorate who may refuse to participate in the election as a result of the intimidating presence of armed security agents.

“More worrisome is the reported shootings across the state capital by officers of the State Security Service (SSS) shortly after arriving the state for election-related duties. We wonder why the SSS had to waste bullets shooting sporadically to scare residents who were not engaged in any form of violence at the time of the shootings.”

The NLC boss stressed that inasmuch as elections are very important to any democracy, “we caution that the state should not be turned into a war.” [myad]