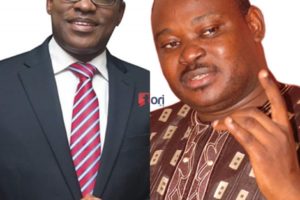 The candidate of the Peoples Democratic Party (PDP) in the Saturday Ondo governorship election before today, Wednesday, Jimoh Ibrahim, has been shoved aside by both the court and the Independent National Electoral Commission (INEC).

While the Court of Appeal, today, quashed his candidacy and handed it to his rival in the PDP, Eyitayo Jegede (SAN), INEC had quickly turned to recognize Jegede as the PDP candidate in the Saturday governorship election in the state.

The appellate court resolved all the seven issued raised in the appeal in favour of Jegede.

The ruling followed the order on Tuesday by Acting Chief Justice of Nigeria (CJN), Justice Samuel Walter Nkanu Onnoghen, for the Abuja division of the Court of Appeal to proceed with the hearing of appeals in all applications concerning the PDP leadership and the PDP Ondo State crises.

This was even as the Chief Press Secretary to the Chairman of the commission, Mr. Rotimi Oyekanmi, said shortly after the Court ruling: “yes, the judgment as we followed it shows that we must replace the name of Ibrahim with that of Jegede.

“We will obey the judgment because this is an order coming from a superior court. We will abide by that decision.

“However, we will expect that the judgment be served on us before Friday to enable us comply. When we are served, we will comply immediately.

“But we are not going to shift the date of the election. We have passed that stage. The election is going to hold on Saturday, November 24 as scheduled.”

Meanwhile, Jimoh Ibrahim has, in a statement shortly after the judgment today, said that he would head to Supreme Court and is sure that he would get justice there.

His statement reads: “I have read the decision of the Court of Appeal delivered today. We have nothing to lose as the Supreme Court seat on the same case tomorrow. We shall get justice at the Supreme Court and if PDP wins Saturday election we shall have our four years mandate to rule Ondo State.
“Let me advise you not to abuse anyone or fight over this one day ruling, which was paid for from the state treasury. Mimiko will not succeed himself with Jegede. This is too sure.
“We will continue with our work and remain in our great party PDP.
“I love the great people of Ondo state and i thank you all for continuous support.”
Jimoh Ibrahim OFR, CFR
2016 PDP Candidate for Governorship Election Ondo state. [myad]