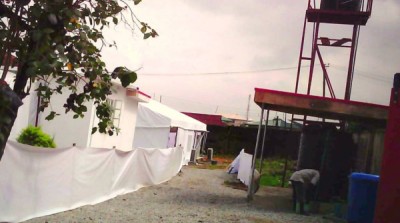 Patients are now avoiding the only general hospital in Kuje, the headquarter of Kuje Area Council of the Nigeria’s Federal Capital Territory (FCT) as the government begin work on the male ward of the hospital to be used as treatment centre for Ebola patients.
This is even as residents of the area, yesterday, issued threatening petition to those working on site to stop the work or face action from them that would not be pleasant. They also drove away the staff of the hospital.
Our correspondent reports that the residents now prefer to go to the Area Council’s health centre for medical attention whenever they fall sick instead of the controversial general hospital.
It was learnt that the medical officers at the general hospital, who used to be busy attending to patients before the coming of Ebola centre case are virtually on holiday as they resort to sleeping to while away time.
It was also learnt that people who live in houses very close to the hospital are already looking for another accommodation either in places far away from the hospital or outside Kuje entirely.
The situation is beleived to have led to protest by various segments of the town yesterday, who stormed the hospital to warn those working on the Ebola centre and the entirely medical staff to quit the hospital or face the consequences.
Amongst those who staged the protest were the market women association, commercial motor cyclists’ association, taxi drivers’ association, youth groups and many others.
It was gathered that shortly after the protesters gave the workers directive to quit site, the workers heeded by vaccating the site, leaving the once bubbling general hospital as empty as ghost infested structure.
It would be recalled that the residents had vowed to resist attempt to site Ebola treatment centre in Kuje, even as the FCT minister, Bala Mohammed insisted that the centre would be located in the town and going ahead to insult the Council chairman, Ishaku Shaban Tete for daring to present his people’s protest at an interactive session with stakeholders. [myad]