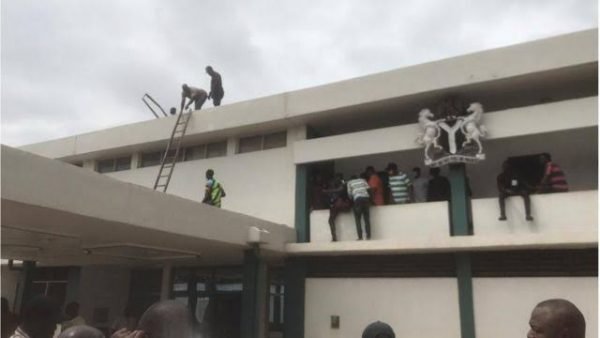 Members of the Edo State House of Assembly have turned it into a house of commotion with the All Progressives Congress (APC) and the Peoples Democratic Party (PDP) in the Assembly neck-deep in crisis, ahead of September 19 governorship election in the State.

The crisis has led to the roof of the Assembly forcefully removed even as the police take over the structure, amidst the impeachment of deputy speaker at a session held in the government House and quick election of a new speaker.

Reports reaching us at the Greenbarge Reporters said that the APC had over-ran the PDP with two more members of the Assembly declaring for the party’s governorship candidate in the September 19 governorship election, Pastor Osagie Ize-Iyamu.

Clip of the video which went viral earlier in the day showed how the roof of the Assembly was removed as several people watched.

The Deputy Speaker, Yekini Idiaye had earlier in the day, August 6, been impeached following his declaration of loyalty to Pastor Ize-Iyamu. He had led four other lawmakers to Ize-Iyamu, bringing the number of those loyal to the candidate and his godfather, Adams Oshiomhole, to 17.

After the impeachment of the deputy speaker, members loyal to Ize Iyamu also gathered to elect Victor Edoror as the Speaker of the Assembly.

This came a few hours after policemen took over the premises of the Assembly.

But, Governor Godwin Obaseki, who defected from the APC because he was denied its ticket for a second term to the APC as its candidate, has cried foul over the alleged move by the APC to impeach him through the crisis that is now festering.

During the crisis in the State House of Assembly, which resulted in the seizure of the mace, the symbol of the Assembly’s authority, truckloads of police descended on the complex to seal it off.

Meanwhile, the APC candidate, Osagie Ize-Iyamu, has made it clear that Governor Obaseki is the best person to account for the crisis in the Assembly, especially the siege by the police.

“Comrade Adams Oshiomhole, or the APC, does not control the Police. The Edo State Government should explain to the world and Edo people what is going on.

“And they can start by explaining why a branch of government meant to carry out oversight functions and check the excesses of the Executive arm has been holding plenary inside the Government House for months over a supposed ‘fumigation and renovation exercise’ at the Assembly Complex’.”

Edo Guber: The Contest Is Between Me And Oshiomhole – Obaseki