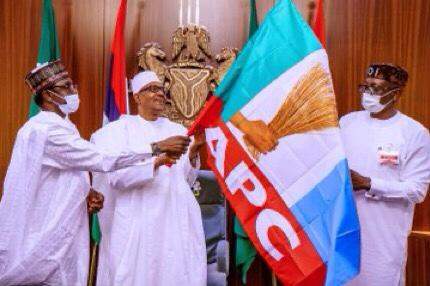 The governorship candidate of the All Progressives Congress (APC), in the September 19 gubernatorial election in Edo State, Osagie Ize-Iyamu, has said that he had avoided stoking crisis in the State because he had no immunity like the governor and therefore would not want to go to jail.

Ize-Iyamu, who fielded questions from newsmen today, August 7, shortly after formally receiving his flag from President Muhammadu Buhari at the presidential villa, Abuja, pointed accusing finger at the State Governor,  Godwin Obaseki, who is the candidate of the People’s Democratic Party (PDP), saying that the governor m should be held responsible for the political violence.

He said that the governor had threatened to deal with anybody that crosses his way,  relying on the immunity he enjoys.

“On the issue of violence that you mentioned, if you ask your correspondents in Edo, it is the governor that has been beating the war drums. My billboards are being vandalised, nobody has touched their own.

“We wrote petitions to the commissioner of police, the Director DSS and they will attest to the fact that on a regular basis they are destroying our billboards. They are the ones that want to make the state ungovernable and I am sure you heard the governor say that himself and his deputy have immunity and so they can deal with anybody.

“I don’t have immunity, I don’t want to go to jail and it is not in my character to deal with anyone. They did their flag off at the stadium, nobody molested them. This  morning I placed a call to the DSS director to tell him that I am aware that the deputy governor has sent money to the student union leaders, appealing to them to come and demonstrate at Ugbowo, which is the route we are taking to our flag off tomorrow (Saturday). Of course the boys were just looking at him and informed us.

Ize-Iyamu said that the immediate past national chairman of the APC,  Adams Oshiomhole, has apologised for the bad things he said about him in 2016.

Oshiomhole had backed Obaseki against Ize-Iyamu in 2016, and while campaigning for the governor, he described Ize-Iyamu as someone who cannot be trusted.