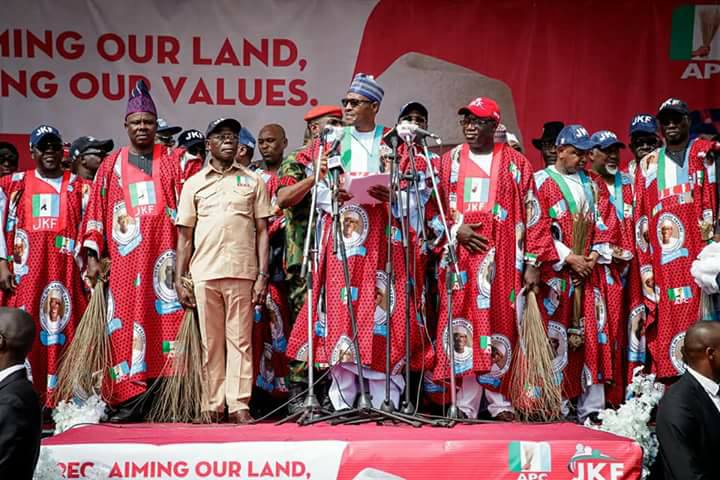 President Muhammadu Buhari has said that he had long known Ekiti people to be very intelligent and politically aware and that no politician should be allowed to brainwash them.

He said to them: “don’t allow yourself to be insulted by stomach infrastructure. Your future and the future of the upcoming generations are in your hands today. Vote for APC and grow beyond Stomach Infrastructure.

“The Ekiti people are a politically aware and well informed electorate. They cannot be brainwashed or deceived.”

President Buhari spoke today at the mega rally of the All Progressives Congress (APC) to drum support for the party’s governorship candidate in the Saturday, July 14 election, Dr. Kayode Fayemi.

Buhari said: “Ekiti State people are dear to me. My earliest interactions with people of this State dates back several decades ago, and I have always found them to be very intelligent and honourable people.

“For those of us with a background in the military, we have come to know officers and men of Ekiti origin to be of exemplary courage, discipline and integrity.

“Today, alongside indigenes of other States, many officers and men of Ekiti origin continue to follow in the footsteps of their forebears, under the command of the current Chief of Defence Staff, General Abayomi Gabriel Olonisakin from Ode-Ekiti.

“Outside of the military, over the years, many of your leading lights, especially in the academia, have distinguished Ekiti indigenes in the comity of states in our federation.”

Buhari rolled out a number of projects which his APC federal government has, in the last three years, executed in the state, governed by the Peoples Democratic Party (PDP) governor

“The APC Government has executed 13 Federal Roads and Intervention Projects in Ekiti State. Some have already been completed and some are near completion.”

The President put the total cost of the roads that have been completed at N766,739,968.37, emphasized that spite of the fact that the current administrations in Ekiti State and the Federal Government belong to opposing political parties, “we have always ensured the State got her fair share in the allocation of resources, the siting of federal projects, and the selection of beneficiaries of federal government programmes.

“We will never play politics with the welfare of the people of Ekiti or any other State regardless of the partisan affiliation of the government of the day.”

President Buhari described as mischievous, allegations being made by some politicians abut his roles in the herdsmen and farmers’ conflicts across the North Central States of the federation, saying “this is cheap blackmail.

“Like I said recently, the protection of lives and property of Nigerians is my responsibility. This, I have vowed to do, and will stick to the oath of office. I assure you that measures are being taken to ensure lasting solutions.

He asked Ekiti people to use the opportunity offered by the Saturday election to correct historical injustice and restore Ekiti State to the path of peace and prosperity.

“The whole country looks to Ekiti to do the right thing by voting for the APC candidate in the election this Saturday, July 14, as you commence the journey to Reclaiming Your Land and Restoring Your Values.”

The President assured that one of the cardinal points of his government is free and fair election.

“In my party, the APC, we do not believe in manipulation of electoral processes. The will of the people must matter. And that is what we will uphold here in Ekiti – FREE and FAIR ELECTIONS. No manipulation of any form.

“I urge all the stakeholders of this important election to ensure free and fair election, embrace peace and promote democracy in Nigeria.”