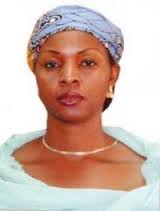 The emergence of Binta Masi Garba as the first-ever female elected state party chairperson of All Progressives Congress (APC) in Adamawa state has excited the former Nigeria Vice President and now the chieftain of the party, Atiku Abubakar.

Atiku, who reacted to what he called the peaceful conduct of the just-concluded congress in the state form where he comes, described the emergence of Binta as “historic and exemplary.”

He expressed confidence in the ability of the female chairperson to lead the party to total victory in all future elections in Adamawa state. He also congratulated  all those who emerged in the process, adding “the party is assured of my total support until we win all our elections.”

Atiku commended the Adamawa State Governor, Admiral Murtala Nyako and other leaders of the party for the high level of accommodation and the spirit of give-and-take that characterized the horse-trading leading to the emergence of the new state executive.