Home NEWS POLITICS Even With Indirect Primary, Gov Yahaya Bello Will Be Defeated – 37... 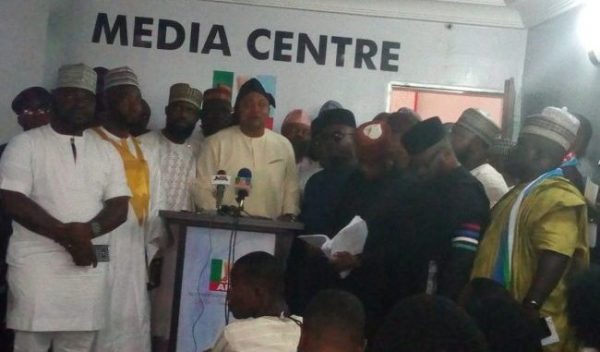 No fewer than 37 governorship aspirants of the All Progressives Congress (APC) in Kogi State have endorsed the use of indirect primary in the forthcoming election to pick a candidate for the party in the State. This was even as they made it clear that the incumbent governor, Alhaji Yahaya Bello will be defeated even with direct primary.

Addressing news men after submitting a letter addressed to the National Executive Committee of APC and other organs, convener of the forum and one of the governorship aspirants, Comrade Edime Godwin Amade, said that member of the group that earlier kicked against the indirect primary were non-APC members.

“It will take too much time, money and logistics to produce a clean and uncontested membership register between now and August 29, 2019. “Even if that impossible feat is achieved, we simply cannot organise trouble-free direct primaries for at least half a million people. Anybody can obtain our party card from anywhere and cause legal trouble.

“In fact, we have proof that in anticipation of their success in moving the NWC to adopt direct primaries, some of the aspirants who turned up here last Monday have started printing hundreds of thousands of APC Kogi membership cards.

“They are also compiling rival membership registers in a bid to make sure the confusion is complete. We, therefore, state categorically that there are no factions in Kogi APC and no rival claimants to the leadership of it.

“Alhaji Haddy Ametuo, our authentic former chairman, and Alhaji Abdullahi Bello our incumbent State Chairman have since put aside their differences and are working hand-in-hand towards the indirect primaries approved for us.

“The case filed by the Ametuo faction against the party has come to an end with the filing of a notice of withdrawal. The Supreme Court has held that by filing a notice of discontinuance such as Haddy Ametuo has done, the plaintiff voluntarily puts an end to the action he instituted. Outside of these gentlemen, there is no other person or group to whom Kogi APC owes anything beyond a level playing field.

“We totally reject anything which will throw our party into chaos on the eve of a major election, especially the imposition of Direct Primaries.

“Direct primaries are responsible for the loss of Rivers and Zamfara States to the APC. The confusion which will trail any imposition of direct primaries in Kogi State will lead to the loss of our state too. The troubles which will follow such an imposition will persist until all the INEC windows closed and the courts are given reason to rule that the APC did not hold any valid primaries. We will fight against this outcome with all our strength.

“Finally, we do not understand how somebody who calls himself a chieftain and an aspirant under a party in power can claim that he does not know the delegates who will vote in an indirect primary election. “Delegates are spelt out in the party guidelines. Delegates are clearly identifiable by their offices and statutory roles. Any aspirant who cannot woo delegates elected by his people is not fit to bear the name.

“The APC must not give room for people to tag it confused or inconsistent by changing established norms to fit every wind of opposition which blows. The legal effects could be catastrophic. Except for a few recently elected officials, delegates for Kogi APC Indirect primaries on August 29 are the same people who voted at the National Convention for the President as our flag-bearer in the 2019 general elections. They also voted for our National and State Assembly contingents at the various Primaries. We must beware of those who now want to impugn the integrity and legality of our delegates. The domino effect of undermining the legality of our delegates will be catastrophic beyond just the forthcoming governorship elections in Kogi state.”

While calling on those supporting direct primary to have a rethink, the forum said: “While we agree that every qualified person is free to aspire to be our flag-bearer, we insist that all aspirants must play by the rules, not seek to change them to scatter the party. It is on record that in 2015, the incumbent Governor was not in control of the party or the delegates yet he subjected himself to the Indirect primaries and because we knew him and what he had sacrificed for the party, he beat 25 other Aspirants to close second behind the late Prince Abubakar Audu. Similarly, every true aspirant should go and start networking the delegates and stop scandalising the party at every turn.”