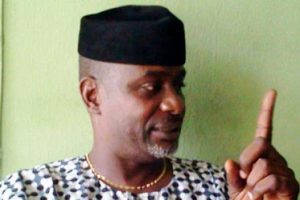 A former Speaker of the Ekiti State House of Assembly, Femi Bamisile, has described the Peoples’ Democratic Party (PDP) as an Aberration and a Canker worm to both political and economic advancement of Nigeria.

The former chief lawmaker, who said that no amount of propaganda will save the party from impending and unavoidable defeat in 2019 general elections, insisted: “PDP is now an aberration and a canker worm to both political and economy advancement of the country because of its failure to put Nigeria on a right tract but rather made looting and destruction of nation’s economy a priority for 16 years”.

Bamisile, an APC House of representatives candidate for Ekiti South Federal Constituency II, in the 2019 general elections, told journalists at Omuo Ekiti that it is an insult for PDP to wish to return to power.

“It is insulting and embarrassing for a party like PDP and its current elements to come around again and promising to reposition the country it had earlier destroyed through looting and bad leadership offered the people. And to crown it all, PDP is now promoting and canvassing votes for a former Nigerian vice president, Alhaji Atiku Abubakar, as its presidential Candidate against President Muhamadu Buhari.

“Nigerians could not have forgotten so easily how PDP basterdised the economy before the masses voted them out in 2015 general elections. Also, with the happenings within the rank and file of the party since then, it is crystal clear that nothing has changed for good within PDP but that it has become worse.

“There is no doubt that the coming general elections would also be another game of integrity and performance test, and the question will now be to compare a-four-year term of APC to a-16-year term of PDP in Nigeria.

“President Buhari had in the last three and years laid a solid structure for economic recovery and development with array of infrastructures cut across all the six geo-political zones.

“The difference is clear and axiomatic. Though PDP is coming to town with looted funds to confuse the electorate and create instability in polity, but we will not fold our arms to watch them to bring back destructive tendencies of the past into the current reformation strides of President Buhari.

“Election is not tea party things and that is why we are going for the general elections with all seriousness to guide against the intruders in their desperate attempt to deceive Nigerians through falsehood, prapaganda and cheap publicity stunt.

“Nigerians are now wise and more informed than before, so nobody can deceive or cajole them to fall into the trap of those who are out there to plung the country back to the days of share the money or diverting the nation revenues into personal or individual accounts even at the nose of the President.

“The last outing of the PDP in power remains not only a disaster, but catastrophe, holocaust and ruin that Nigerians will not forget so easily because of its repercussion which everybody has been battling with, up till now.

“Therefore, it is imperative and exigent for Nigerians to be wary of the antics, other clandestine and cloak-and-dagger moves by the PDP Agents to take them back to a journey of economy servitude and serfdom through carelessness looting and bad governance.

“The 2019 general elections will be a consolidation to the liberation of all Nigerians from the desert witnessed in 2015 to a fertile land that has been prepared by President Buhari in the last three and half years.”