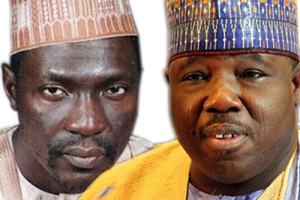 Faction of the opposition Peoples Democratic Party (PDP) has called for the postponement of the governorship poll in Ondo State, saying that Jimoh Ibrhim cannot be its candidate.
The PDP, in a statement by the factional National Publicity Secretary of the party, Prince Dayo Adeyeye, warned that if the election is not postponed, Jimoh Ibrahim and the Independent National Electoral Commission (INEC) should be held responsible for whatever happened.

“We must urge all Nigerians to hold the Federal Government (INEC), APC and the Jimoh Ibrahim group for any consequences of the dangerous games that they have chosen to play with the Nigerian people.”
Dayo Adeyeye’s statement calling for the postponement of the election reads in full:
Yesterday, the Court of Appeal Panel led by Justice Ibrahim Salauwa set up to determine the appeals of Senator Ahmed Makarfi and Mr. Eyitayo Jegede (SAN) against the scandalous judgment given by Justice Okon Abang of the Federal High Court, Abuja controversially adjourned all proceedings sine die.
In doing so, Justice Ibrahim Salauwa stated that the decision to adjourn was taken in the face of a petition written against the panel to the Chief Justice of the Federation (CJN) and Chairman of the National Judicial Council (NJC) alleging acts of corruption, bias and breach of oaths of office amongst others.
Furthermore, the respondents had filed a motion at the Supreme Court in which the Justices of Court of Appeal Panel were named as co-respondents in their personal capacities.
The indefinite adjournment is a consequence of the latest of several mischievous actions taken by Messrs Biyi Poroye, Jimoh Ibrahim and their legal team led by Mr. Ben Nwofor (SAN). These actions, ranging from unsubstantiated allegations of corruption to outright disrespect and disregard for the Justices of the Court of Appeal to disruption of Court proceedings and flagrant abuse of Court processes, are all designed to achieve one aim – stall proceedings and ensure that the legitimate Candidate of the Party is prevented from contesting the November 26th, 2016 Gubernatorial Election in Ondo State.
This outright bullying and intimidation of Justices of the Court of Appeal is enabled by the recent invasion of the homes of Justices of the Supreme Court, and the arrests and harassment of several judges by men of the Directorate of State Services. These actions are achieving the desired effect as Judges are now compelled to refrain from furthering the course of justice by unsubstantiated allegations of corruption.
We are aware that this is only a part of a much bigger plan to use all available resources of State to prevent the legitimate Candidate of the Party from running for and winning the Ondo State Gubernatorial Election. We are aware that this is part of the plan to use the Judicial process, security agencies and the Independent National Electoral Commission (INEC) to rig the election in favour of the Ruling Party (APC) before the Election Day.
We call on all well meaning Nigerians to urge the All Progressives Congress (APC) led Federal Government to desist from the use of organs of the Nigerian State as a tool with which to subvert the will of the Nigerian people.
The judiciary is seen as the last hope of the common man. When the freedom and independence of the judiciary to further the course of justice is tampered with, people often resort to self help. The current situation must not be allowed to deteriorate to that point.
We call on INEC to postpone the Election pending the determination of the Suit before the Supreme Court. We make this call against the backdrop of the fact that INEC is a party to the suit before the Court of Appeal and Supreme Court and is well aware of the steps taken by certain parties to the Suit to frustrate the course of justice.
We also make this call against the backdrop of the fact that INEC postponed the Edo State Gubernatorial Election and recently postponed the Rivers Rerun elections without any cogent or visible reason.
We urge the Justices of the Supreme Court to stand fast in the face of this existential threat to the independence of the Judiciary and democracy itself. We urge the Justices of the Supreme Court to remember the maxim “Justice delayed is justice denied” while determining the issues before it.
We use this opportunity to ask our teeming members and supporters in Ondo State and across the Country to remain calm. We believe that there are men and women of integrity in the Judiciary who will ensure that this act of injustice does not stand.
May God bless Nigeria. [myad]