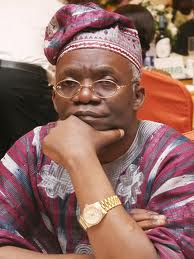 A Lagos constitutional lawyer, Chief Femi Falana (SAN) has asked the police and federal authorities to quickly withdraw all masked police and security personnel from election duties in Osun State before Saturday governorship election in the state.
This even as he declared that wearing of masks by security agents during election is illegal.
Falana was reacting to the news that armed police personnel wearing masks would be deployed to man the polling units during Saturday’s election in the State.
In a statement issued today in Lagos, the lawyer recalled an interactive meeting held by the Chairman of the Independent National Electoral Commission, Professor Attahiru Jega and the Inspector General of Police, Mr. Suleiman Abba with the governorship candidates and political party representatives in Osun State at Osogbo yesterday where it was announced that armed police personnel wearing masks would be deployed to man the polling units.
He recalled also that it was announced too that the use of telephone handsets and other gadgets to take photographs of ballot papers by individual voters had been prohibited by the authorities.
“As both announcements are part of the culture of impunity in the country, it is pertinent to state the position of the law on the official pronouncements.
“Firstly, by virtue of Section 125 (3) of the Electoral Act 2011 (as amended) the secrecy of voting is limited to individual voters as no person shall:- “a. interfere with a voter casting his vote, or by any other means obtain or attempt to obtain in a polling unit information as to the candidate for whom a voter in that place is about to vote for or has voted for; “b. communicate at any time to any other person information obtained in a polling unit as to the candidate to whom a voter is about to vote or has voted for.
“The above provision of the law does not prevent voters from recording the details of ballot papers in the course of casting their votes once they do not obtain information from other voters concerning the candidates they may have voted for. It is therefore totally misleading on the part of the INEC leadership to say that it is illegal to take photographs at the polling units If INEC has nothing to hide, it should not prevent voters from recording the details of their individual ballot papers.
“Secondly, it is public knowledge that the governorship candidate of the Peoples Democratic Party, Senator Iyiola Omisore, has been campaigning with masked men with the connivance of the Police Authorities. Instead of banning the provocative harassment of law abiding citizens by the official terrorists the Government has announced that many more of such masked men would be deployed under the pretext of maintaining law and order during the Osun State Governorship election.
“I wish to state that neither the Police Act nor the Electoral Act has authorized the wearing of masks by security personnel during elections in Nigeria. It is pertinent to draw the attention of the Federal Government to section 280 of the Nigeria Police Force Regulations which provides that
“Orders of dress and dress regulations, shall be promulgated by the Inspector-General of Police in Force Orders.
“The Inspector General of Police has neither promulgated that police personnel involved in election duties should wear masks nor published any such dress order in the Police Force Orders. To that extent, it is illegal on the part of the police or other security personnel not to wear name tags for proper identification during election duties.
“In the recently concluded governorship election in Ekiti State there was no deployment of security personnel wearing masks. What has warranted the desperate deployment of masked men to police the Osun State governorship election? If the INEC is committed to the conduct of transparent governorship election in Osun State it should not prevent voters from recording the exercise with electronic gadgets. If the Police Authorities are committed to the maintenance of law and order they should withdraw all masked police and security personnel from election duties in Osun State.
“Having regard to the level of mobilization on ground and the vigilance of the people of Osun State the Federal Government should be held responsible for the imminent break down of law and order by armed thugs who have been officially sanctioned to hide behind the masks to rig the Osun State governorship election. However, it is not too late in the day to jettison the illegal plot to manipulate the governorship election in Osun State.” [myad]