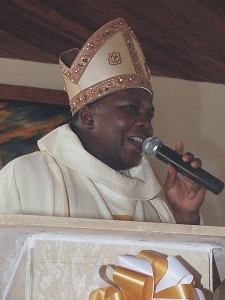 Rt. Rev. Emmanuel Badejo,  the Catholic Bishop of Oyo Diocese, has expressed fear that 2015 general elections in Nigeria portend great danger to the survival of the country because of the way politicians are using  religion to further  their political ambitions.

Badejo, who spoke in an interview in Abuja, regretted that politicians are promoting religious differences for selfish interest, saying that the signs ahead of the 2015 polls  portend great danger going by the attitude of some politicians.

“What I am afraid of now is the tendency of politicians to begin to stoke the fires of religious differences as a pillar of their agenda.

“Politicians are now saying that this person should not be there because he did this and he did that to Christianity; we do not need that,” he said.

He enjoined both Christians and Muslims  to desist from making religion to look as if it is the problem of the country, adding: “Religion is a blessing; it is religion that helps us to modify the tendencies and excesses that we have.

“Politicians should mention their agenda, put it to people, sell it to the people and then hope to be elected.

“That is something we should look after in the South West of Nigeria.” [myad]