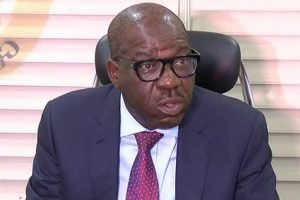 Embattled Governor of Edo State, Godwin Obaseki, has finally dumped the ruling All Progressives Congress (APC) on which platform he was elected about four years ago.

The governor, who was disqualified last week from taking part in the the June 22 primary for a possible second term in office, announced his resignation today, June 16.

He did not however announced the new political part he is going to pitch his tent with, but said that he will do that later.

He gave an indication that he will contest for a second term on the platform of the yet to be announced new political party.