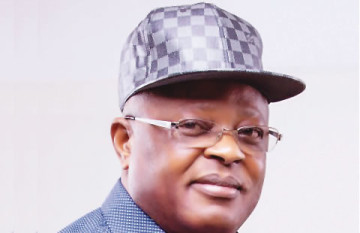 Governor David Umahi Of Ebonyi State has left the Peoples Democratic Party (PDP), the platform on which he came to office, insisting that he did so in the interest of the South East region.
Speaking in Abakaliki today, November 17, Umahi alleged that despite serving the PDP for years, the party does not give attention to the interest of the region.
He said that his stance on zoning the presidential ticket to the South-East is not for his favour as being speculated in some quarters.
Umahi explained that he would continue to agitate for the interest of the South-East, stressing that he has decided to become the sacrificial lamb that would be crucified for the interest and good purpose of Ndigbo in general.
“Let me clear the air and state that I never sought for the ticket of PDP presidency and I will not. Whoever that said that I moved to APC because they refused to zone the ticket to me is being very mischievous.
“Because even if PDP promises me, an individual a presidential ticket, how does it work?
“It is expected that over 8,000 delegates would elect the person and such promise can not happen with less than 10 or 20 people.”