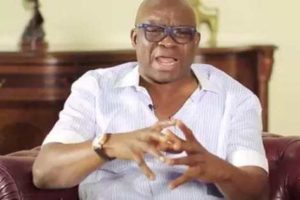 Ekiti State Governor, Ayodele Fayose has accused the Independent National Electoral Commission (INEC) of connived with the All Progressives Congress (APC) and its collaborators in the Peoples Democratic Party (PDP) to rig the Ondo State Governorship election.
“Just as I would have loved to congratulate the winner, Rotimi Akeredolu (SAN), because in every contest, there must be a winner and a loser, the role of INEC in awarding victory to him in the election left much to be desired.”
The governor, who reacted to the outcome of the election in a statement issued by his Special Assistant on Public Communications and New Media, Lere Olayina, said that INEC gave the APC victory in the election by deliberately replacing the name of Eyitayo Jegede, the PDP candidate, thereby creating legal logjam that lasted till three days to the election.
He said that the PDP went to the election with its hands tied to the back because of the uncharitable actions of INEC, which has become an arm of the APC.
He said that apart from the APC, political parties in Nigeria are now contesting elections against INEC, saying: “to sustain the ‘see and buy’ strategy and legalize money politics, the APC-led federal government deliberately created poverty in the country so as to continue to enslave the minds of Nigerians with peanuts to get their votes on election day.

“Dibo ko sebe (vote and collect money to cook soup) was the slang used by the APC in the Ondo State election and that only worked because the APC federal government have put Nigerians in abject poverty.
“Even though INEC allowed what appeared like a free and fair atmosphere on the election day, the election had been won and lost before it was held.
“For instance, INEC that witnessed the PDP primary election that produced Eyitayo Jegede succumbed to pressure from the APC cabal to replace him with Jimoh Ibrahim, who did not take part in any primary election known to the Electoral Act.
“What could anyone have done under 72 hours in an election that was heavily monetized by the APC?
“The whole process was a deliberate sabotage by INEC, which has totally bastardised the electoral process.
“Obviously, all these shenanigans are geared towards turning Nigeria to a one part state by weakening all opposition parties ahead of the 2019 general elections but I can assure Nigerians that this will not last because the people will always be defeat tyranny.” [myad]