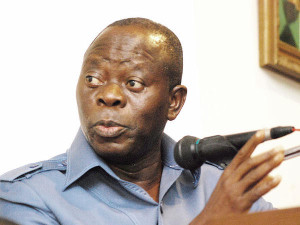 Governor Adams Oshimhole of Edo state has lamented the lawlessness that is being perpetrated by four Peoples Democratic Party (PDP) members in the state House of Assembly with full connivance and back up of men and officers of the Nigeria police in the state.
Oshiomhole, who spoke to newsmen at the side of the National Council of State meeting held at the Presidential Aso Villa today, said the PDP members have chosen to disregard a High Court ruling barring them from entering the Assembly even as the police continue to give them cover to disrupt peace in the state.
The governor said that as a unionist who had spent most parts of his adult life fighting the government and bad system, he would not allow himself to be intimidated by the federal government, using Police and four renegade members of the state House of Assembly.
He narrated how the four members decided to create unnecessary confusion in the governance of the state simply because they wanted to show their masters in Abuja that they are strong.
“The good people of Edo state know their antics and have placed them where they belong. They even asked the High Court that barred them from the premises of the Assembly to go to hell. That no court can stop them from doing what they want to do.
“What is happening in Edo state is a celebration of lawlessness by just four suspended PDP members of the House of Assembly with police providing them support.”