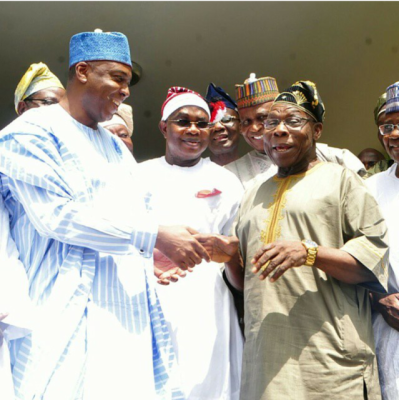 Senate President, Bukola Saraki has ran to the former Nigerian President, Olusegun Obasanjo to intervene in what looks like a silent war between him and his party, All Progressives Congress (APC) on one hand, and between him and President Muhammadu Buhari on the other.

Senator Saraki, who had a close-door meeting with Obasanjo at his hilltop mansion, Abeokuta, Ogun state today, along with his colleagues in the Senate, was said to have asked Obasanjo to reconcile him with President Buhari and his APC.

It was learnt that Senator Saraki complained to Obasanjo that even though the party leaders have indicated that they have accepted his emergence, but there has been a“complete communication breakdown between him, the president and the party.”

Obasanjo was said to have told Saraki and his delegation, in his usual jocular self: “ you children of nowadays only run to elders when you have finished making the damage.” He however assured them that he would do his best to “ensure that there is communication between all parties.”

Saraki emerged President of the Senate a couple of weeks ago against the decision of APC leaders. He was elected unopposed at the time most Senators from the APC were at the International Conference Centre waiting to hold a meeting with President Buhari to discuss the election of the Senate president and Speaker of the House of Representatives.

The national chairman of the APC, John Oyegun, had abruptly cancelled a scheduled meeting with Mr. Saraki last week without giving another appointment.

It was gathered that Saraki had tried severally to meet with Buhari after his emergence, but was always denied audience.

The President is believed to be angry with Saraki and the management of the national assembly for going ahead with their election despite adequate knowledge of an invitation for a meeting with Mr. Saraki and his colleagues.

“The president considered it as a mark of disrespect for his office for Saraki to ignore an invitation to meet with him and his colleagues.”

“I am not aware of any request for a meeting, the president would have seen him, he represents a key institution in our democracy,” he said.

Saraki and most members of his delegation are largely Obasanjo’s “boys,” a term loosely used in describing the former president’s staunch loyalists. [myad]