Home NEWS POLITICS How Jonathan Chickened Out Of Visit To Chibok For Security Reason: He... 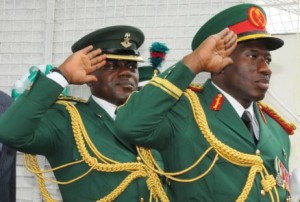 President Goodluck Jonathan, who was scheduled to visit Chibok in Borno state today from where he was to take off to Paris for a security summit on Boko Haram, cut off such visit to the epicenter of the abducted female students of the Government Girls Secondary School by members of the deadly Boko Haram on April 14th  even as the Presidential spokesman, Dr. Reuben Abati denied that President ever scheduled any visit to Chibok.
The visit of President Jonathan to Chibok was abruptly cancelled at the last minute “due to security reasons,” according to sources.
A presidential official had told AFP early afternoon: “The president has cancelled his visit to Chibok. It was on his schedule up until this morning.”
The official did not give any reason for the abrupt cancellation of the visit.
Jonathan, who is also the Commander-in-Chief of Nigeria’s Armed Forces, has been under fire for refusing to visit Chibok to commiserate with the affected families.
However, in a statement today, Dr, Abati said that it is traditional that every movement of the President were documented and announced ahead of time, adding that in this care, there was no record indicating that Jonathan would visit Chibok.
According to him, the press statement he issued regarding the President trip was that to Paris, France, adding that any visit to Chibok was an important one that would have attracted a formal statement from his office.
He insisted that the trip was not on Jonathan’s schedule for the day.
“Every movement of the President is documented and backed by press statement. Chibok is very important. Such trip would have been backed up by a press statement from my office.
“We never announce Chibok trip. It was not on the President’s schedule. All the reports about the so-called trips quoted some unnamed government officials. Let the journalists identify the officials.”
He said it was wrong and maliciousness to allege that a “non-existent trip has been cancelled.”