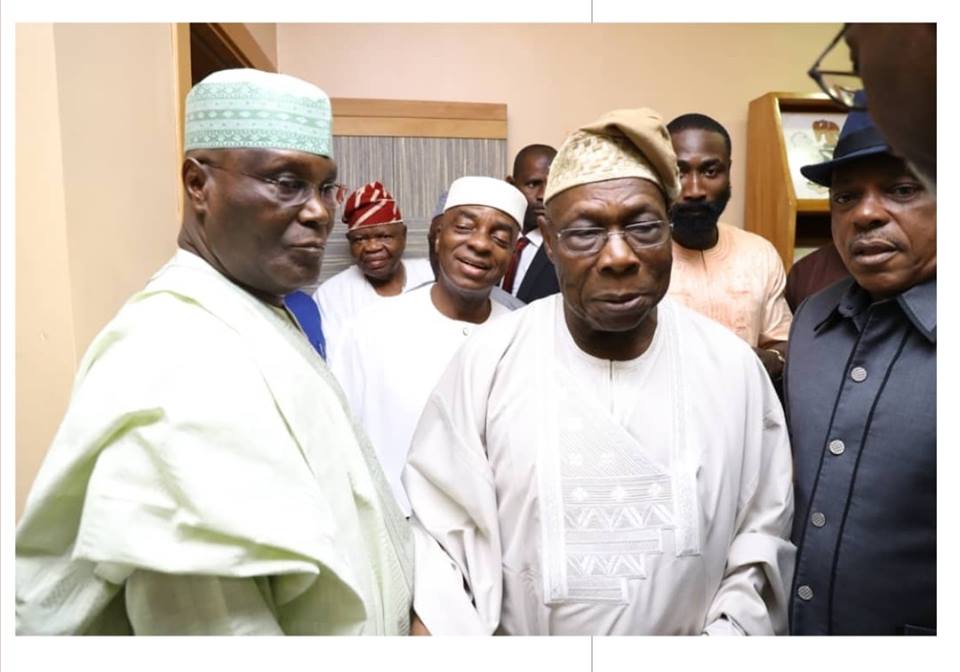 A former top police officer, retired Police Commissioner Abubakar B Tsav, has painted a picture of the plan of the opposition People’s Democratic Party (PDP), it’s presidential candidate,  Alhaji Atiku Abubakar, former President Olusegun Obasanjo and other elements in the opposition to cause political confusion during the 2019 general elections from where an interim government would be installed.

Speaking at a news briefing on the State of the Nation today, Tuesday in Abuja, Abubakar Tsav, who is currently the President of National Front of Nigeria (NFN), said that the political elements in the PDP and those at the periphery wanted to cause political crisis leading to possible absence of elections.

Their aim, he explained, was to cause “widespread uprisings and protests that would have eventually produced an interim government. The repeated defeat of the terrorists made the opposition, in this case the People’s Democratic Party (PDP), to be faced with the prospect of going into an election it is guaranteed to lose to the incumbent President Muhammadu Buhari, who is seeking re-election on the platform of his party, the All Progressives Congress (APC).”

Full text of the press statement goes thus:
In recent hours, events that were previously taken in isolation of each other have now been confirmed to not only be interconnected but they are also pieces in one big puzzle, a grand plan to force regime change on Nigeria while masking the crime as part of the democratic process, viz the general election that has now been postponed by the Independent National Electoral Commission (INEC). Because most Nigerians had innocently taken events in isolation, the natural reaction has been one of condemnation of INEC, with several persons and groups accusing the electoral body of working for whatever political party they suspect. We shall come to heaping our criticism on INEC but not before we attempt to alert Nigerians to the real dangers facing them as a people.

Whatever shortcoming has been observed with INEC, its state of readiness, its troubled election logistics and battle with credibility crisis amongst others are nothing but symptoms. It is like an individual having a high fever, pale skin tone, vomiting and a host of other manifestations; the manifestations themselves are not the ailment they are merely symptoms of a deeper infection or life threatening organ damage that the body is dealing with. All efforts can be put into managing or treating the symptoms but they will amount to nought if the root cause of the problems are not addressed. Painfully, INEC is today a microcosm of Nigeria, a country grappling with contrived problems that are nowhere in the region of natural.

It is on record that the period preceding elections, prior to the postponement, witnessed unprecedented spike in the number of Boko Haram attacks that the Nigerian Army repeatedly repelled, often inflicting heavy casualty on the insurgents. In the security circle, intelligence report confirmed that these attacks were intended to produce a situation when it would become glaring that it was impossible to conduct elections.

The objective was such that in the absence of elections there would be widespread uprisings and protests that would have eventually produced an interim government. The repeated defeat of the terrorists made the opposition, in this case the People’s Democratic Party (PDP), to be faced with the prospect of going into an election it is guaranteed to lose to the incumbent President Muhammadu Buhari, who is seeking re-election on the platform of his party, the All Progressives Congress (APC).

Recall that prior to this, a former president, Chief Olusegun Obasanjo, cobbled together several alliances and coalitions that failed woefully like every other thing he has ever laid hands on. Even though Chief Obasanjo had in the past invoked God’s wrath on himself if he ever returns to the PDP (he tore his membership card to seal the curse) he has since fully returned to the PDP and is now its most popular gladiator, save the party’s presidential candidate, Alhaji Atiku Abubakar. Obasanjo had made it appear as if certain clerics captured in photo op with him and Atiku were instrumental to brokering peace between him and his former deputy but events have proven otherwise. What they did in Otta on the day they purportedly made peace was to further perfect their scheme against democracy in Nigeria. As we speak, the denomination lead by one of the clerics at that meeting continues to abuse and desecrate the name of God by converting sermons into political campaigns.

In the aftermath of that meeting, Chief Obasanjo initiated contact with his neocon masters. The objective of that contact was to handpick the enforcers that were sent to Nigeria as election observers. Tragically, this is the one area where INEC got it wrong. They accredited these international enforcers without adequate background checks. What has now happened is that a lot of them from western country are in reality in the country to manipulate the presidential election in favour of Atiku Abubakar and the PDP.

The compromised and pre-determined position of these so called observers has been confirmed by several actions they have taken. Instead of working as independent countries, they coordinate to issue statements that are solely intended to erode the public perception INEC, criminalize the federal government and to canonize Atiku Abubakar as a president in waiting even when elections have not held. They have also taken on a belligerent attitude, in which they dictate what they want to happen and expect INEC to frogmarch to their tune. All these abhorrent behaviours on the part of the foreign intruders were encouraged by Atiku and his party who wrote several letters upon which they are basing the legitimacy of their interference. Of course they continue to cite the invitation that INEC, because of the naivety of its Chairman, Professor Mahmood Yakubu, extended to them to monitor the elections.

See also:  Group Asks EndSARS Protesters: What Else Do You Want?

This naivety of Professor Yakubu has hurt the country in no small measure. Right under his nose staff of the Commission were compromised by the opposition to the extent that even the final list of candidates were presented for his signature only after Alhaji Atiku Abubakar, Chief Obasanjo and Rivers State governor, Nyesom Wike have approved it. The compromise of INEC was so bad that results have been written in favour of the PDP before the Election Day while sensitive election materials were delivered to PDP chieftains in several areas hence the failure of the materials to be delivered to the right destinations and officials at a few hours to the elections. The logistics failure that prompted the postponement was therefore contrived by these people and not a natural occurrence.

The evil that was planned against Nigeria by Chief Obasanjo and his protégés – Atku, Wike and others is beyond imagination. It was as if he has sensed that Nigerians will vote in a way that will disgrace him with his failed alliances and lying letter so he decided the only way to save face is to manipulate the elections by compromising the umpire. A last minute realization of the crimes that have been committed in INEC is what jolted its Chairman out of his lethargy to postpone the polls in the hope that remedial actions can still be taken to reverse the damage that the PDP, Obasanjo and Atiku have done to its credibility.

Before now, there has been several calls on these men to desist from their acts that are capable of plunging the country into crisis but it is now apparent that they are not amenable to reason. Instead of retracing their steps they have approached their western allies to mount undue pressure on INEC while unfairly accusing the government of the country. They are activating their international enforcers to declare the elections as fraudulent while ignoring the capacity of this irresponsible move to cause widespread unrest. The media is also replete with fake news they are pushing to the effect that the elections would be rigged by the ruling party while in reality they, the PDP, are the ones that are desperate to win in the Obasanjo do or die style.

We call on Nigerians to shift from their indifference to become more assertive in declaring the kind of country they want, a country that faces its challenges headlong under a patriotic leaders or a colony governed by the appointee(s) of western countries. This is why citizens must rise up to the challenge of subduing unpatriotic, corrupt and selfish past political office holders if they must save Nigeria from collapse.  If the progress being made under President Buhari must be reversed for any reason then it must be a decision that Nigerians make with their votes that must be cast without manipulation. Citizens should exercise their right to insist that the progress and national development under a patriotic nationalist like President Buhari is a must.

Our demand to Professor Yakubu and INEC as an institution is simple. The Commission must identify, sack and hand over its compromised staff to the police for prosecution before proceeding with the election. A failure to do this would imply that INEC has no intention of doing the right thing which would greatly undermine its credibility like the western coalition and the opposition have been trying to do. Where INEC fails to yield those indicted for prosecution, we encourage the police to arrest them before the election.

We remind the foreign observers that have been going beyond the terms of their accreditation to retrace their steps. A failure to retrace their steps will guarantee some sort of retribution in the short term and they can be guaranteed that a blend of the internet and the social media will make it possible for aggrieved parties to meddle in their own internal affairs in damaging ways. It is expected that they will not have cause to lament should matters come to that.

We warn that the postponement of the election has not discouraged these mischief makers. They will exploit their other fall back options as they continue to try to hijack power without winning election, which would cause crisis in the country. Nigerians and the Federal Government must therefore not let down their guards as the danger has not passed but has only retreated to mutate into something more evil than its previous option.