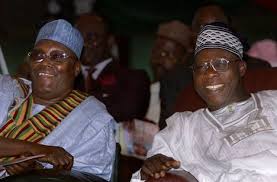 Former Vice President Atiku Abubakar has made it clear that he harboured no ill-will, hatred or enmity towards the former President Olusegun Obasanjo under whom he served as number two man, stressing that whatever misunderstanding that existed between them is now all over.

Atiku said in an audience with the leaders of the Northern Youth Leaders Forum who paid him a courtesy visit in his office in Abuja today: “I don’t harbour any grudge against my former boss. Yes, we had disagreements (when we were in office). These were mere disagreements. I harbour no hatred or enmity against him or anybody. I never had anything against him and I will never have.”

The group, which had already met the former President  in Ota, at which event Obasanjo was also reported to have announced that he had forgiven his former vice president, was led by Comrade Eliot Afiyo.

Atiku made it clear that he has opponents in politics and not enemies, adding: “Politics is not war.”

The former Vice President expressed gratitude to the group for successfully brokering peace between him and Obasanjo, adding that this single effort had marked the leaders of the youth organisation as serious-minded people, who are fully prepared to take over the leadership of the country from the elders.

Speaking on the current security situation in the country, Atiku appealed to the Federal Government to take the challenge more seriously.

“If we can go to other countries to rid them of these kinds of problems, it shows that we have the capacity to put this one down immediately so that the suffering of the people can be reduced.” [myad]