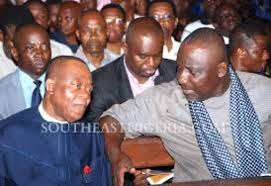 The Government of Imo State has formally accused Governor Theodore Orji of Abia State of blackmail and demanded an apology in respect of what it described as his unfounded allegation that the convoy of Senate President, David Mark was attacked when went to attend the burial of Chief John Anyaehie in Orlu.

Spokesman to Governor Rochas Okorocha of Imo state, Mr. Sam Onwuemeodo, in a statement said that the government of Imo State had expected that after the Police and other security agencies in the country had confirmed that the convoy of the Senate President was neither attacked in Imo State nor did the incident happen within the state, the Abia State Governor, would have apologized to the Government of Imo State “over his uncomplimentary remarks and insinuations on the incident which the Imo State Government had considered as a blackmail,”

Onwuemeodo accused the Imo state governor of speaking in a hurry, adding that though such thing is human, but that “one had expected that he would have added fiber to the nation’s growing democracy if he had apologized to the Government and people of Imo state for talking in a manner that had given the impression that he had blackmailed the Government and people of the state, using the alleged attack on the senate president’s convoy as tool.

“Apologising  to the Government and people of Imo state would not have done any damage to the image and office of the Abia State Governor, rather, the apology would have portrayed him as a humble  and courageous leader, and it does not also show weakness but strength of character.

“The state government is worried that more than two weeks after the facts of the claimed attack on the convoy of the Senate President had been known and the fact that the incident didn’t even happen in Imo State, the Abia Governor would have done the most honourable thing, and that is, to apologize to the Government and people of Imo State.

“And having waited on the Abia Governor to do that before now, and that was not done, we then decided to draw his attention on the need to do that, to discourage such hasty utterances or actions against the state in future.

“Imo and Abia states are from ‘one womb’ and the Abia Governor would have called his brother Governor in Imo State on the matter in question to know whether such incident took place in his state  or not before making hasty conclusion and hasty comments that were obviously designed to impugn on the Government and people of Imo State.”