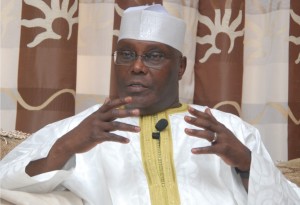 Former Vice President Atiku Abubakar has said that the escalating security challenges in the country has reached an embarrassing proportion even as he asked the Federal Government to urgently take steps to halt them.

Reacting to the twin bombing in Kaduna on Wednesday, targeted at Islamic cleric Dahiru Bauchi and former Head of State and All Progressives Congress (APC) national figure, General Muhammadu Buhari, the former Vice President said a situation where a former Head of State and key opposition figure could be targeted by terrorists or hatchet killers is a dangerous development, which should not be taken lightly by any responsible Nigerian.

According to Atiku, the targeting of Buhari, whatever might be the motive or whoever could be behind it, has added a dangerous dimension to a bad security situation in the country.

He explained that the attack on Buhari has only deepened the anxiety of ordinary citizens  that nobody is safe if a former Head of State could be so targeted and almost killed but for providence.

The former Vice President noted that while it is the duty of all leaders regardless of political affiliation to support the anti-terrorism efforts in the country, it would not be wise to keep quiet when events are taking disturbing dimension.

He observed that while public support is essential to fighting insecurity, the government also has the task of reassuring the citizens that its measures and strategies are working to justify the huge expenditures on security.

Atiku who is also the Turaki of Adamawa, said that sustainable public support for these counter-terrorism efforts depends largely on the results being achieved.

The former Vice President also maintained that it is beyond his comprehension why terrorists and assassins operate with maximum ease, undetected and unmolested by anybody.

He added that his opinion has nothing to do with politics, but about the larger interest of Nigeria of which he is a stakeholder.

Atiku said he was embarrassed by the frequency and brutality with which terrorists and other criminals commit atrocities without detection.

He urged security agencies to rise to the deteriorating security challenges by deploying needed software and hardware to intelligence gathering.

He restated that the security, welfare and the happiness of the citizens are basic functions of every government. Therefore, he said no leader should be happy with a situation where the citizens become captives of fear feel abandoned to their fates.

He expressed his condolences to the families of the bereaved while urging that no effort should be spared in attending to the injured in need of medical attention. [myad]