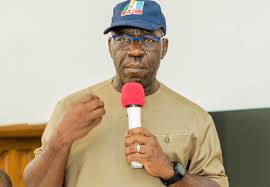 The embattled governor of Edo state, Godwin Obaseki has described as absurd, insinuation that he had joined the opposition Peoples Democratic Party (PDP).

“It is very absurd. I am someone that is very exposed. How can I collect from two parties when we have rulings in past disqualifying people on that. I am a party man to the core. APC is my party because I come from a progressive political family.

“I believe in the ideals of APC, I believe in our President, I believe in what he stands for so I am a party man to the core. I am not an old styled politician. I represent a new direction of politics that is based on facts and truth not lies.”

Governor Obaseki, who spoke to news men today, June 3, after submitting his completed Expression of Interest and Nomination Forms at the party’s secretariat, Abuja, said that he is actively pursuing peace, actively pursuing harmony in the APC, particularly at home and believed that he would secure peace.

“We are a reformist party, we are a progressive party. That’s why I am here today to indicate my interest and my desire to run for another term as governors of Edo so that I can continue in the service of my people,”

“I want to put it on record that I am grateful; he assisted me just as I assisted him. I know the sacrifices we made to make him National Chairman. So what are we talking about?

“In life, everybody gets helped, everybody gets assisted. The person talked about had no money when he left labour to contest. We knew what we did to make him Governor. I sacrificed eight years of my life probono; I collected no Kobo to serve him in Edo. Today we know what we have built because of where we started from.

“So when you talk of betrayal, the biggest betrayal can be when people betray a cause, when they betray an idea. That is the greatest betrayal of all. It is like betraying God. When you said to God, this is what I stand for and then God gives you power then you turn around and do the exact opposite.

“There is no greater betrayal than that. So when you talk about betrayal let us be very clear.

“The reason I went to see our National Leader is that I don’t want the party turn apart. I am a man of peace. For me and my colleague governors we cannot see a party we built destroyed, we cannot see a ruling party been so weakened and whatever it will take to secure peace, to secure harmony in the party, we are prepared to, I am prepared to make.

“That is why I joined my colleagues to go and see the leader, Asiwaju Bola Tinubu to assure him that we are all working for the same course, we are all working to build our party. From 26 States, we are now 20. We don’t want to lose anymore state, there is really no reason to. We should all drop our egos and work for our party and the unity of our country.

“However, I am using this opportunity to call on Comrade Oshiomhole to recluse himself from the Edo nomination process because he is an interest party. It is against natural justice for a man to be a judge in his own case. So I think the honourable thing to do is to recluse himself and lets have a free process and lets reconcile and build our party.”

Nigerians Will Not Welcome PDP, The University Of Lies In 2023

Group To Atiku: You Are Myopic