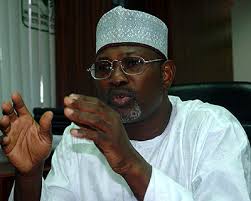 Chairman of the Independent National Electoral Commission (INEC), Professor Attahiru Jega has expressed disgust at the introduction of mask security personnel into the election duties in the country, making it clear that he would not allow the use of such agents in the 2015 general elections.
“Any security personnel deployed for the election must be someone identifiable.”
Professor Jega made the position of the Commission known during an interactive session he had in Abuja with both local and international Civil Society Organizations (CSOs) who are involved in monitoring elections in the country.
He described the emerging trend of using hooded security men for elections as highly worrisome.
“In recent times, we have witnessed an increased presence of hooded security operatives during elections. This is an emerging trend which is highly worrisome and which needs to be addressed in good time. “Security agents who are deployed on election duties should not be masked, the doctrine of transparency requires that they should be identifiable.
“We will not allow such persons during the 2015 elections. Any security personnel deployed for the election must be someone identifiable such that if anything happens we will be able to know who to hold responsible.”
The INEC boss decried what he termed “over-zealousness” of some security agents during the August 9 governorship election in Osun state, saying that some staff of the Commission and nine NYSC members, who were engaged as INEC ad-hoc staff, were erroneously arrested and kept in detention for over 12 hours.
He said that they were arrested around 9pm on the eve of the election while on their way to the Registration Area Centers, which was provided for them by the Commission.
“They were not released until about 6am the next day, a situation that almost disrupted the distribution of electoral materials in some areas.
“It was sheer luck that we still managed to open the polling units early, otherwise, there would have been disaster. We took a serious view of that and reported the matter to all the appropriate authorities because at a point, we became worried that some persons wanted to undermine our effort.”
Jega said that the perceived over militarization of the just concluded Ekiti and Osun state governorship elections did not deter electorates from coming out to vote for their candidates.
“In fact, the two elections proved that there was a high correlation between the massive deployment of security and the willingness of people to come out and vote.
“Apart from over-zealousness on the part of some of the security men on the field, we discovered that people actually felt more secured to exercise their franchise.
“The key lesson our politicians need to learn from the two elections is that the era has gone when they relied on corrupt electoral officers or security agents to manipulate elections.
“In this era, any politician that intend to win election must reach out and convince the voters, be it through ‘stomach-infrastructure’ or otherwise.
“The only guarantee to win election now is to let the voters come out to vote for you, which in turn means that you must first of all convince them on your credibility.” [myad]