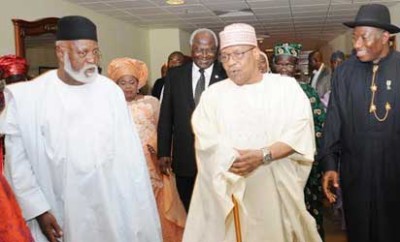 Against the background of the discordant calls from across Nigeria on citizens living in parts of the country outside their states to go back to their states of origin, President Goodluck Jonathan has rallied governors and past leaders of the country to look at how they can stem the disintegration.
It is on record that the United States of America predicted over a year ago that Nigeria will disintegrate in 2015. Calls from various ethnic groups across the country, on their people in other parts of the country to return home or people ordering people from other parts of the country to return to their states of origin appear to be pointing to such disintegration.
At an emrgency Council of State meeting held today at the Presidential Villa, Abuja, President Jonathan, the governors of 36 states and past leaders of the country resolved to ask states that are thinking of deporting none indigines from their states or registering them for any purpose to stop it immediately.
“Anyone with sense of history would recall that Nigeria civil war began in similar manner,” the Council lamented.
The leaders frowned at calls by ethnic groups on their people either to return home from states that are not their home states or ordering people to leave their states.
The meeting was attended by most of the governors and or deputy governors, former leaders like forme President Shehu Shagari, former military President General Ibrahim Babangida, former Heads of State, General Abdulsalami, General Yakubu Gowon, Ernest Shonekan as well as the National Security Adviser, Col. Sambo Dasuki and other security chiefs.
Briefing newsmen shortly after the meeting, the governors of Akwa Ibom State, Godswill Akpabio, Niger state, Babangida Aliyu, Enugu state, Sulivan Chime and Col. Dasuki said the leaders were worried by the dangerous development in the polity.
They said that the leaders have asked governors to stop not only the registration or deportation of Nigerians from any part of the country but expressed disgust at the concept of indigeneship in the Nigerian political set up.
They said that a committee was set up at the meeting to fashion out the modality for Nigeria to attain true unity even before 2015. The committee, headed by governor Akpabio of Akwa Ibom state, has two months to submit its report to the government.
Othe members of the committee are governor Babangida of Niger state, governor Ibrahim Dankwambo of Gombe state, governor Aliyu Magatakarda Wammako of Sokoto and governor Olusegun Mimiko of Ondo state.
Some of the things the committee is expected to look into, the governors said, would include the issue of discriminatory school fees and contract appointments into civil service for none indegines in some states. [myad]

See also:  Dino Melaye To Gov Wike: We Will No Longer Tolerate Your Insult On Atiku