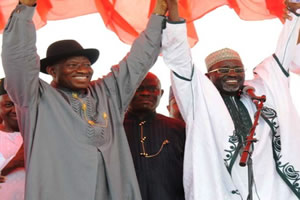 President Goodluck Jonathan, today, swore-in four new ministers who were cleared by the Senate last week even as he allocated portfolio to them with the former Kano State Governor, Ibrahim Shekarau being assigned to the ministry of education.
The President, who performed the swearing-in of the ministers shortly before the beginning of the weekly Federal Executive Council (FEC) meeting at the Presidential Villa, Abuja, also made some minor cabinet reshufflement.
The new ministers and their portfolios are: Mallam Ibrahim Shekarau-Education
Dr. Stephen Oru-Niger Delta Affairs
Mr. Adedayo Adeyeye -Minister of State, Works Dr. Abdul Bulama-Minister of Science and Technology.
President Jonathan directed the erstwhile Minister of State, Works, Ambassador Bashir Yuguda, to take over as Minister of State for Finance. Yuguda will also continue to supervise the Ministry of National Planning until a substantive minister is named.
The President warned the new ministers that their appointments were not enviable, saying that they were being brought in at a time when Nigerians expected a lot from them.
He advised them to perform not only to satisfy him but all Nigerians.