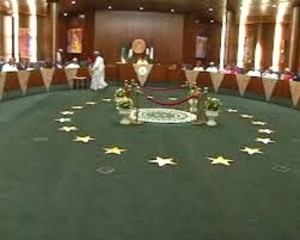 The weekly Federal Executive Council (FEC) was held today specifically to pay tribute to the late Nigerian minister of information and communications, Professor Dora Akunyili, who died in an Indian hospital on June 7 while undergoing treatment for cancer.

Professor Akunyili was also a former Director-General of the National Agency for Food, Drug Administration and Control (NAFDAC),
At today’s solemn meeting presided over by President Goodluck Jonathan, council members took turns to pay glowing tributes to the late NAFDAC boss.They condoled with the president, family of the deceased and the entire Nigerian women over the loss.
In his tribute, President Jonathan described Akunyili as “very upright, courageous and a role model per excellence to young Nigerians and the women folk in general.”
He said “the first impression I had of Akunyili was the way she dressed as a typical Nigerian. I first met her when I was Deputy Governor in Bayelsa.

“She was a very upright woman. When she was Minister of Information, she was very courageous. I believe so many young ladies would emulate her exemplary life.”
The President added that Akunyili made a huge impact as director-general of NAFDAC and her re-brand Nigeria programme as Minister of Information remained a national reference point.
Vice-President Namadi Sambo described Akunyili’s death as a great loss to the country, describing her as “a patriotic and dedicated Nigerian. NAFDAC is a sanitised institution because of Akunyili, who developed a system for the re-branding of the the country.”
The Minister of Finance, Dr Ngozi Okonjo-Iweala, said Akunyili was a woman of strength and conviction who fought hard to ensure drug counterfeiting became a thing of the past.
“NAFDAC was consistently voted as the best agency of government during her time. She was a committed mother and a devoted wife, an excellent Nigerian woman whom many looked up to”.

The Minister of Solid Minerals Development, Mr Musa Sada, in his tribute, described her demise as a great loss to the country, adding: “Akunyili was a patriot from whom one always wanted to learn. Even at the expense of her life, she fought hard to rid Nigeria of fake drugs as NAFDAC director-general.”
The Minister of Power, Professor Chinedu Nebo, said he first met Akunyili before he became the Vice Chancellor of University of Nigeria (UNN), Nsukka, where she later became a professor.

“The late NAFDAC boss was a woman of courage; she was courageous enough to speak up at a trying moment of our national history. Akunyili was a religious and prayerful woman. She was very conversational. As a country, we have lost a gem and we pray that God gives us such a woman of honour and respect.”
The Minister of Labour and Productivity, Chief Emeka Wogu, the Minister of State for Defence, Mr Musiliu Obanikoro and the Minister of Works, Mr Mike Onolememen, who also spoke at the event, described her as a woman with uncommon courage.

The Minister of Information, Mr Labaran Maku, who worked with Akunyili as Minister of State for Information and Communications, described her as an outstanding public servant.
Maku said “she put her life on the line. She took the war to her home state, Anambra, to battle producers and importers of fake drugs because she wanted the best for her nation.
“She treated me like her brother and we worked together. She permitted me to jointly address the press after FEC meetings and that was a huge honour to me.’’

Maku said the rebrand Nigeria project was still ongoing as the department was still being funded in the ministry with the “Good People, Great Nation” jingle still running in the media.
He urged public servants to emulate the exemplary service rendered by Akunyili to the nation.
He said the late minister used her visibility as a public servant to showcase Nigerian fashion because she always wore traditional dresses.

Maku moved a motion for special condolences to the President, Nigerian women, the country’s fashion industry, the Ibo nation and the Akunyili family.
The motion was seconded by the Minister of Water Resources, Mrs. Sarah Ochepe, and a minute silence was observed in her honour, followed by special prayers for the repose of her soul. [myad]