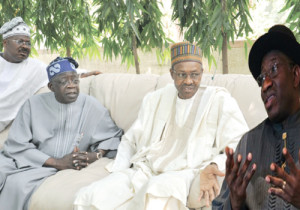 President Goodluck Jonathan has called on leaders of all the political parties in Nigeria to rise against what he called very remorseless anti-democratic forces operating in the political system that are ever ready to exploit lapses in the management of the political and electoral processes.Some of these forces, he warned, are out to use the forthcoming 2015 elections “as their last stand to truncate the nation’s hard won democratic liberty. But, dear compatriots, with respect to the 2015 elections in particular, and our journey as a Nation in general, we must never allow these negative forces to prevail.”The President, in his address at the Summit of the All Political Parties and Political Stakeholders held on Thursday at theInternational Conference Centre (ICC), Abuja noted that the onset of the 4th Republic, under the administration of President Olusegun Obasanjo, brought the institutionalization of inter party mechanisms, domiciled in the Office of the Special Adviser to the President on Inter- Party Affairs.The concept of inter- party relations and collaboration, he added, presupposes that even though political parties may differ in ideologies, processes and structures of governance, but that they must remain united in the common objective of preserving and consolidating the nation’s unity and its democratic foundation.“Political party affiliates must, thus, relate with one another and conduct themselves with responsibility and statesmanship focused on positive inputs into governance, whether they be in power at present, or not. “Inter-Party relations and collaboration make it incumbent on the party in power, at any level or section, to govern in recognition of the beneficial voices and views of opposition parties. And vice-versa for the parties out of government, to proffer issue-based engagement, geared towards improved performance in governance, and service delivery to the people.”President Jonathan said that this is only possible through a rancour free relationship among political parties, in their conduct, acts and utterances.The President regretted that the current national political outlook with regard to inter -party collaboration has been less than salutary, adding that the conduct and utterances of leading politicians at home and abroad are rapidly creating and spreading unnecessary tension in the country.“Unguarded utterances on their part,fester the embers of discord, bitterness and rancour.“Such unfortunate developments play into the hands of extremist elements, waging a vicious campaign of terror against the Nigerian State.“The recent mindless bombings and killing of innocent Nigerians in Nyanya in the Federal Capital Territory, Jos in Plateau State, the killing in Adamawa State including that of the traditional ruler as well as the heartless and criminal abduction of over 200 school girls from a secondary school in Chibok, Borno state are better addressed by a political class which is united in its commitment to defend the polity irrespective of political differences.  We must never politicize the fundamental and core imperative of defending the State.  To do so can only embolden the terrorists and other enemies of our Republic who will seek to exploit any perceived political and social divisions for their nefarious ends.  We must never give them such opportunity.  Our political parties must remain positive and constructive engagement as we seek to build a virile, strong and stable nation that can compete with other states in the world. Jonathan said that the Summit by all political parties offered the opportunity for political parties and politicians to reflect and review the possible consequences their actions, conduct and utterances in the recent past have had and could have, on our polity, national security and corporate existence.  “This Summit must be an occasion for political rejuvenation and re-orientation. Its outcome must be a common stand against all and any anti-democratic forces that are currently waging a vicious and mindless war against the State.   the President reminded them that they needed to first build a nation before engaging in arguments on how best to run it.According to him, the system is not yet so shockproof to withstand all unguarded and careless political statements and actions, saying that if the state enterprise fails, no political party or politician will be spared from the consequences.“Hence, at a time such as this when our existence as a nation is threatened by anti-democratic forces, we, politicians and political parties, must rise to the higher moral ground in defence and protection of our existence as one nation and one people. “Our role should not be limited to the struggle to win elections and acquire political power, but also to handling the demands of patriotism and statesmanship, and restoring hope to the Nigerian people.The President stressed the exigency of acting, conducting and speaking those things that reflect, at highest level, a commitment to the defence and preservation of the nation’s social cohesion, political stability and sovereignty.“We must reinforce, and recommit our various supporters across the nation to the Nigerian Project, irrespective of party affiliation, ideological differences and alliances.”