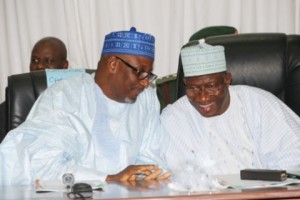 “I want the national chairman (of the Peoples Democratic Party) to go home with a word from the father that come 2015, Jonathan will run for presidency for the second term.” These were the words of the chairman, PDP Board of Trustees (BOT), Chief Tony Anenih.

Chief Anenih said this while addressing party faithful at the maiden zonal tour of the south-south by the new PDP chairman, Alhaji Adamu Mu’azu, on Tuesday in Calabar, Cross River.

He said that the party is becoming stronger in the south-south, adding that “if we continue like this, the load in 2015 will be lighter than the load in 2011.″

The BOT chairman said that the party had worked hard for next weekend’s governorship election in Osun and that it is sure of clinching victory in the election.

“We are working and we are sure that we will win Osun, come Saturday,” he said.

Mu’azu said the party would ensure that internal democracy prevailed in its choice of candidates for various elective positions in 2015.

He said that the party would not entertain any short-cut or favouritism in selecting the candidates, even as he advised members and supporters to shun rumour mongering and falsehood because of their implications on party success and stability.

“The opposition has seen that we are winning in all fronts and they are ready to destroy us. Therefore, let us be careful as we are in a very trying time.”