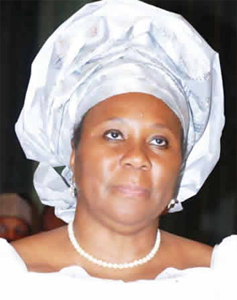 Former Nigeria’s Minister of Women Affairs and member of the Board of Trustees of the Peoples Democratic Party (PDP), Iyom Josephine Anenih has complained of how the party had let her down on many occasions in the past.
“In fact, if this was a PDP rally, I probably would not have come because the Party has let me down too many times.”
Josephine Anenih spoke yesterday in Awka, Anambra state, during a rally of the women wing of the Transformation Ambassadors of Nigeria (TAN) for the Southeast zone.
She made it clear that she was not at the rally because of PDP, adding: “this is not a PDP rally and I am not here because of PDP.
“So you might ask why I am here. I am here on this platform as a Nigerian Woman Leader. I am here to tell you that President Goodluck Jonathan has kept faith with Nigerian women by empowering them in a way that no other President has ever done.”
Josephine said that the women would not want the PDP to play with Jonathan’s right to an automatic ticket as a sitting President, as is done in every civilized democratic nation in the world, insisting that the Party must give him the ticket to run.
She listed the programmes of empowerment to include the YouWin  programme which has empowered so many young entrepreneurs to build their businesses and employ other people, the appointment of almost 35 percent women in Ministries, Departments and Agencies MDAs, with most of the strategic MDAs and others being headed by women.
“President Jonathan nominated 92 women to the just concluded National Conference, including a 24-year old woman and a blind woman.
“With the challenges facing us as a country we cannot afford to play politics with the destiny of our people. This is no time for selfish politics of personal interest. Our definition of politics must change.
“Four months to election year, we cannot be guessing who will lead the battle to face the challenges confronting us.  “Today we have Boko Haram, terrorism, insurgency and, now, Ebola. This is no time to try a new hand. This is the time to stick with who you know- who can deliver and has delivered.
“Four months to election year, we have not seen any other candidate we can x-ray or assess. It is, indeed, irresponsible and utter disregard of the electorate (by any party) to sell your candidate in less than four years. You need four years and not four months to sell any candidate.
“We need someone that cares and feels our pains. We have had four years to assess Dr Goodluck Jonathan and we are telling you he has passed the test. We know Jonathan; so we should go with him.
“He has not let us down. He has more than delivered on all his campaign promises.”
Josephine Anenih recalled how, in company with the First Lady, Dame Patience Jonathan, she and others, using the Women for Change message, mobilized Nigerian women all over the country before the 2011 elections.
“We got Nigerian women to massively vote for President Goodluck Jonathan.  This President is the Women’s President.
The mandate he has today is the mandate we gave him. It is because it is our mandate and because he is our representative, today, that Nigerian women are giving the President an ultimatum. Nigerian women can give their President an ultimatum. We are giving the President an ultimatum: You must run.” [myad]