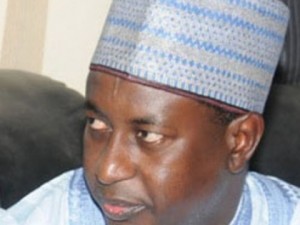 Kaduna State House of Assembly has suspended its former speaker, Alhaji Usman Gangara for three months after finding him guilty of stealing and hiding its mace.

The decision to suspend him at its sitting today followed the report submitted by the House Committee on Education, Ethics and Privileges that investigated the whereabouts of the mace, which disappeared from the house on September 24, 2013.

The mace was removed from the floor of the assembly during the leadership crises that rocked the assembly and which led to the removal of Gangara and other principal officers.

Since then, the Assembly had to dust the mace used by the previous legislature to conduct its business.

While presenting the report, the Chairman of the committee, Mr. Philemon Gidan-Mana, said their investigations had revealed that the former speaker was responsible for the disappearance of the mace.

Gidan-Mana said the committee recommended that Gangara be directed to return the mace to the Clerk of the house and proceed on a three months suspension.

The sitting, which was presided by the Deputy Speaker Mr Peter Adamu, put the motion to vote, and those in support of Gangara’s suspension won.

Adamu then announced that the Assembly had suspended the former speaker with immediate effect for three months.