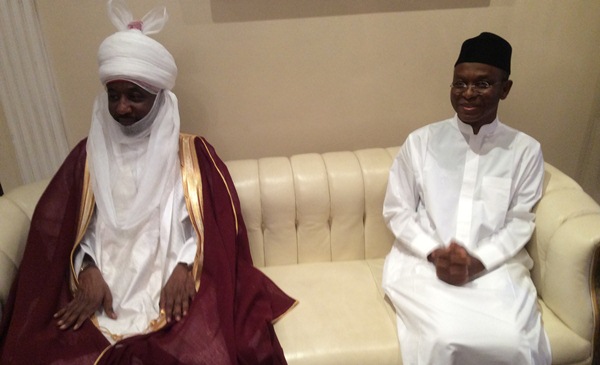 Former Governor of the Central Bank of Nigeria and Emir of Kano, Alhaji Muhammadu Sanusi II, has asked the Kaduna governor-elect, Mallam Nasiru el-Rufai not to lose his connection with Kaduna people whom he set to govern

The emir who led the Kano Emirate Council to congratulate el-Rufai in Kaduna today also charged his long time friend to focus on responsive and dedicated leadership even as he expressed confidence that el-Rufai would not disappoint the people of Kaduna state.

He commended the people for entrusting the leadership of the state in the hands of el-Rufai, saying that they have made the right choice. He described el-Rufai as “competent and capable.”

The spokesman of the governor-elect, Mr. Samuel Aruwan, quoted the Emir in a statement to have commended the people of the state in their choice of el-Rufai, whom he said would take the state to the next level in terms of development.

The ex-CBN governor was also quoted to have called on the people of the state, irrespective of religion, ethnc and political affiliation, to pray and support el-Rufai for peace and even development in the state.

The statement read: “The Emir expressed his confidence that el-Rufai will provide strong leadership good governance and unite the diverse peoples and faith communities of Kaduna State.

“Sanusi further charged el-Rufai to focus on responsive and dedicated leadership and never to lose his connection with the people.

“The Emir, who recalled his decades of friendship with el-Rufai, said he is delighted ‘that Nigerians with such ability and experience are stepping forward to offer themselves for leadership’.

” Sanusi prayed that God would grant el-Rufai a successful tenure and bless the people of Kaduna State.”

In his response, El-Rufai thanked the Kano monarch for his visit  and commended him for redefining the traditional institution.

El-Rufai told the Emir that his administration would not disappoint the people of the state, adding that d he would operate an open door policy and would be ready to listen to the yearnings of the people, irrespective of their religion or ethnic background. [myad]