Home NEWS POLITICS Kogi: PDP Did Not Achieve In 13 Years What APC Achieved In... 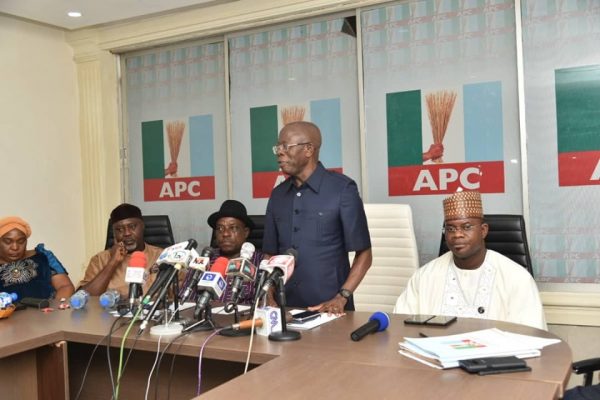 The National Chairman of the All Progressives Congress (APC), Adams Oshionhole has said that the Peoples Democratic Party (PDP), which ruled Kogi State for 13 years, from 2003 to 2016 did not achieve what Governor Yahaya Bello has achieved just three and a half years in the State.

Oshiomhole, who spoke today, September 5 at the party’s headquarters in Abuja during a meeting of the National Working Committee (NWC)of the party with the governorship aspirants in the state, stressed that weighing the performance of the previous administrations and that of the governor (Yahaya Bello): “you will score the current governor higher if we must tell ourselves the truth.

“Bello did not only inherit salary arrears from his predecessors which he had defrayed but also inherited burdens of infrastructure, projects approved and money paid but were not executed and the governor is doing all such projects today,“ he said.

”Even our party’s enemies will agree with us that Yahaya Bello has done well in the area of security. If the people are not secured, no meaningful development can take place.”

Oshiomhole said that three of his relatives were kidnapped in Kogi State while travelling from Edo to Abuja during the PDP administration, saying: ”I have people who live in Kogi State and we all know the level of insecurity in that state before. But today you can all agree with me that the current governor has addressed the issue of security in Kogi,” he said.

The APC boss said that the rots left behind by the 13 years rule of the PDP in the state could not be cleared in four years by Yahaya Bello- led APC government even as he called on the people to support the governor for a second term.

Oshiomhole said the meeting was to resolve grievances that arose from the primary election in the state and to harmonise the party for the 2019 election.

“We have had an extensive conversation as APC family to touch issues that arose from the primaries in Kogi. Aspirants have spoken their minds and we have heard them as National Working Committee of the party.

”I am glad to let you know that all our aspirants including those that were disqualified and those that contested and lost, have agreed to work with Governor Yahaya Bello, who is the APC flag bearer.”

The chairman thanked all the aspirants for their understanding and loyalty to the party while commending the people of Kogi State for standing by the APC. He assured the people of more democratic dividends.

He said that all the defeated aspirants had also agreed to work with Mr Bello to win the next election, stating that none of them was going to court on the primary matter.

Yahaya Bello was declared the winner of the APC governorship primary held in Lokoja, the Kogi State capital Thursday night. He polled 3,091 votes to defeat his closest rival, Babatunde Irukera, who polled 109 votes.

Chieftain Of PDP In Delta, Prince Nwanazia, Moves To APC Over Unending Crisis