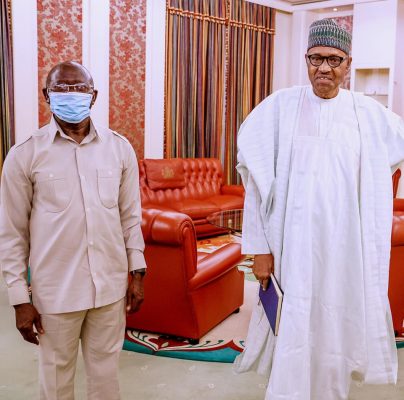 Immediate past national chairman of the ruling All Progressives Congress (APC), Comrade Adams Oshiomhole has said that he is not jobless by the fact that he had lost out through judicial processes.

Oshiomhole, who spoke to newsmen today, August 17, shortly after a private audience with President Muhammadu Buhari at the presidential villa, Abuja, said that he did need APC’s chairmanship to continue to shine in all other aspects of life.

Reacting to those he called “pig” with whom he would not like to glorify by exchanging words, the former chairman said:”you want me to engage in a fight with a pig? (referring to the Director General of the Progressive Governors’ Forum). If you engage in a fight with a pig, the pig already is stained by its nature and you will smear your white garment, and in my own case, kaaki, to go and wrestle with a pig? I will not.

“You see, when I was removed as national chairman, Edo was APC. So do I have to win a Edo to become the chairman? Do I look so unemployed? I’m 68. So, what they don’t understand is that, it is not the office of chairman that made me who I am. It is my pedigree from my days as labourer in the textile industry to be the general secretary of textile workers all over Nigeria and becoming the president of NLC.

“There is no village I go to that people do not know me and it is this that I used to override the Godfathers in Edo State for two consecutive terms and even got the governor elected through elections. There was  no violence before becoming the national chairman.

“So, if you remove the office…is like our president now, though I cannot compare myself to him, but it is like President Muhammadu Buhari. By 2023, when his tenure would have lapsed as President, those who believe in him, in 2024 and beyond, each time they see him, that trust they have in him will always be there.

“He bonds with the people. That bond was not created by the fact that he is the president. In fact, he became the president because of that bond.

“So, it takes an empty brain to suggest that I only want to stage a come back to become the national chairman. For what? To go and do a reset?

“So, my attitude is not to reply the noise and it is coming from somebody who says he is an employee and appointee of Progressives Governors Forum. He is just like the cowards that are using him that are not able to come out. “Otherwise, you should ask this guy, who is now an election expert. He contested for senate against Makarfi, he lost. He even contested against governor El-Rufai during the primaries and he lost, before Fayemi unilaterally appointed him the DG.

“So, if he is now the spokesman abusing me and all of that, you want to drag me to his level? “No! A gentleman does not wrestle with a pig. If you do, you will always be stained and I don’t want to get into that.”