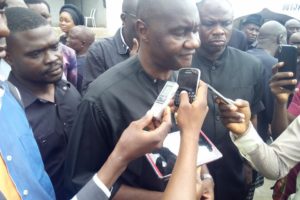 Magnus Abe of the All Progressives Congress (APC), who has just been declared winner in the Senatorial election of the Rivers State South East Senatorial District, has called on Governor Nyeson Wike of the Peoples Democratic Party (PDP) to congratulate him on his victory, as he promised.

“I want to call on the governor to keep his words and send me his letter and words of congratulation because I have won.”

Magnus Abe, in his acceptance speech today, Sunday, shortly after the Independent National Electoral Commission (INEC) declared him winner, said that his victory is a reward for faithfulness, even as he extended a hand of friendship to Governor Wike, reminding him of his promise that there was nothing personal in this contest.

“And he (Governor Wike) has said that if I win he will congratulate me. The only barometer for measuring success in an election in this country is the declaration by the Independent National Electoral Commission (INEC) and the commission has declared me the winner. I want to call on the governor to keep his words and send me his letter and words of congratulation because I have won.”

The Senator-elect acknowledged that Rivers State has suffered enough and that it is time for the contestants to bring this contest to an end by facing the task of correcting the mistakes of the past.

He thanked the APC leaders, President Muhammadu Buhari, Chibuike Rotimi Amaechi and the people of Rivers South East Senatorial District, whom he said have spoken loud and clear with their votes, adding: “we should respect your views. We should work together to make this district a better place for Nigerians to live. [myad]