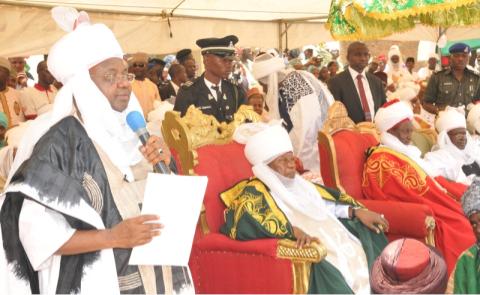 Vice President Mohammed Namadi Sambo has described the traditional rulers as custodians of Nigeria’s cultural values.
The Vice President who was at the Turbaning Ceremony of the Governor of Kaduna State, Alhaji Mukhtar Ramalan Yero, as the Dallatun Zazzau, by the Emir of Zazzau, Alhaji Shehu Idris today
Arc Sambo while advising the newly turbaned Dallatu said “As custodians of our rich history, culture and traditions, I urge you to follow the footsteps of your predecessors by being steadfast in your responsibilities and roles assigned to you. You must at all time keep in mind that you represent our rich and noble values and must continue to protect the positive image of the emirate locally and international.”
Namadi Sambo said that the conferment of the exalted title on the Governor is noteworthy, saying that it is part of the efforts by Emirate to consolidate on its gains by repositioning its fortunes
Speaking, Governor Ramalan Yero expressed appreciation to Almighty Allah for the recognition, even as he appreciated the Emir and his council, his parents and those that had played prominent roles in his life.
He also thanked Vice President Namadi Sambo for the positive role he played in his life, even as he pledged to uphold the virtues of the title.
He called on residents of the State to join hands with him to deliver on his developmental goals.
Chairman of the Northern States Governors’ Forum and also the Governor of Niger State, Dr. Babangida Aliyu, who spoke on behalf of his counterparts, expressed appreciation to the Emir and his council for recognizing one of their own.
He said that this has shown the synergy between the traditional institution and those in government.
Earlier, the Emir of Zazzau, Alhaji Shehu Idris, said that the title was in recognition of the immense contributions of the Governor to the progress of the Emirate, Kaduna State and the country at large.
He prayed for continued peace, stability and tranquility in the country.
The event had a very colourful Durbar and was graced by the Governors of Gombe, Katsina and Kogi States. Others also present were several deputy governors, members of the executive and legislature from both the state and federal levels, as well as thousands of well wishers.
Governor Ramalan Yero is the 19th Dallatun Zazzau, and the third to be installed by the current Emir