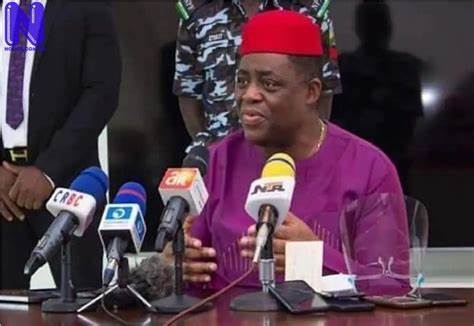 Names of top shots currently in the opposition Peoples Democratic Party (PDP), including serving governors, who are warming up to cross over to the ruling All Progressives Congress (APC) have been unveiled.

Speaking to newsmen today, September 16, shortly after he met with President Muhammadu Buhari to declare his formal defection from the PDP to the APC, former Nigeria’s Aviation minister under the PDP government, Chief Femi Fani Kayode, confirmed that there are many people who would soon join him.

“If you ask my friend and brother, Governor Matawale here, there are many people within the PDP, who really do want to come over to the APC,

I can tell you that, I was there and very instrumental when Governor Umahi joined the APC.

“There are many others. Some of the most remarkable men in this country are still within the ranks of the PDP; it’s our job to try to win them over. Now, if you don’t mind me mentioning names, somebody like the governor of Enugu State, the governor Oyo State, and of course, my good friend, the governor of Bauchi State, great friends of mine, and I sincerely hope that they too may end up coming in this direction.”

On his defection to the APC, Fani Kayode said: “I believe I have been led by the Spirit of God and I will fight the … and fight for what I believe is right within this party as I would anyways.

“I will never give up on my core values and principles.”