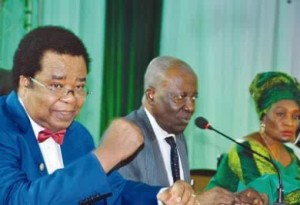 The National Conference appears to be dividing along regional line, as the final report emanating from it has pitched delegates from North-central, South-east, South-south and South-west against their counterparts from North-east and North-west. The Southern delegates today openly accused their Northern counterparts of plot to sabotage the final consideration of the Conference reports.

The atmosphere at today’s plenary was saved from degenerating into full physical fights by the conference chairman, Justice Idris  Kutigi leading to abrupt adjournment.

Immediately after the adjournment, southern leaders and their middle-belt counterparts held a press conference where they openly condemned plans by some elements to sabotage the huge successes recorded so far by delegates.

They unanimously maintained that no individual or group inserted anything into the draft documents, as being rumoured by northern delegates.

“Those  making the arguments and alleging smuggling in  of draft constitution  are mischief makers who are bent on keeping the country hostage,” they said.[myad]