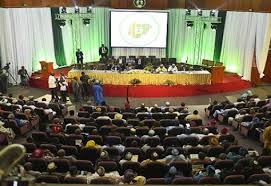 National Conference which begins Committee works, with 20 Committees now in place, may submit its final report to its convener, President Goodluck Jonathan between June 16 and 19 this year.

According to the Work Plan, the Conference is expected to receive reports from committees and commence deliberations on May 5 and May 6 before breaking the plenary again for participation in the World Economic Forum which will hold in Abuja.

Deliberation on the various committee reports will resume on May 12 and will last till May 15 when deliberations would be completed.

Between May 19 to 29, the Conference Secretariat, working with the Report Drafting Committee, will put the report together and present such to the Conference in plenary.

Consideration and adoption of the draft reports by the Conference in plenary will start on June 2 and will end on June 12 after which the final report would be produced and signed between June 16 and 19.

The Work Plan indicates that Committee work would begin tomorrow, Tuesday April 22 and would end on Wednesday April 30, even though some of the members are arguing that the time allocated to committee work is too short in view of the exhaustive and thorough job expected to be done.

But, the Confab chairman, Justice Kutigi has advised delegates to first get down to work; and if it becomes necessary to extend the time, the appropriate representation will be made to that effect.

He explained that the Work Plan was drawn based on the time allotted to the Conference by the Federal Government; and that any attempt at arbitrary adjustment could be misunderstood even by the general public who may misconstrue the motive.

He however assured that everything would be done to ensure that lack of time does not hinder the justification of the Conference but urged delegates to properly articulate their points at the committee level and be opened to suggestions from others. Delegates who have useful position papers that can help committees other than their own are also encouraged to forward such documents to the appropriate committees.