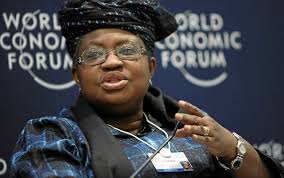 A civil society group, Socio-Economic Rights and Accountability Project (SERAP) has dragged the Minister of Finance, Ngozi Okonjo-Iweala, to court over “failure to provide information about spending of the alleged missing N30 trillion, which represents some accruable income to the Federal Government in the past four years.”
The suit, filed at the Federal High Court, Ikoyi, followed a Freedom of Information request by SERAP to Mrs Okonjo-Iweala dated February 2. The originating summon, with suit number FHC/L/CS/196/2015, was filed on behalf of the organization by Senior Staff Attorney, Olukayode Majekodunmi.
SERAP’s suit followed disclosure by the former Governor of the Central Bank of Nigeria, Professor Chukwuma Soludo that over N30 trillion had been missing, or stolen, or unaccounted for, or simply mismanaged under the minister’s watch.
In the suit, SERAP argued that “a necessary implication of the rule of law is that a public functionary and institution can only act in accordance with the law, as to do otherwise may enthrone arbitrariness. Obedience to the rule of law by all citizens but more particularly those who publicly took oath of office to protect and preserve the constitution is a desideratum to good governance. In a democratic society, this is meant to be a norm; it is an apostasy for public official like the Minister of Finance to ignore the provisions of the law.”
SERAP also argued that Mrs Okonjo-Iweala “As trustee of public funds has a legal duty to render account on the missing N30tn to the beneficiaries (Nigerians) of the trust, if and when called upon to do so.”
The organisation also argued that Okonjo-Iweala “has so far failed, refused and/or neglected to provide the Plaintiff with the details of the information requested. By virtue of Section 1(1) of the FOI Act 2011, the Plaintiff is entitled as of right to request for or gain access to information which is in the custody or possession of any public official, agency or institution. By the provisions of Section 2(7) and 31 of the FOI Act 2011, the Defendant is a public official.
“By virtue of Section 4 (a) of the FOI Act when a person makes a request for information from a public official, institution or agency, the public official, institution or urgency to whom the application is directed is under a binding legal obligation to provide the applicant with the information requested for, except as otherwise provided by the Act, within 7 days after the application is received. By Sections 2(3)(d)(V) & (4) of the FOI Act, there is a binding legal duty to ensure that documents containing information relating to spending of the alleged missing N30tn is widely disseminated and made readily available to members of the public through various means,” the organization also said.
According to the organization: “The information requested for, apart from not being exempted from disclosure under the FOI Act, bothers on an issue of national interest, public peace and security, public concern, social justice, good governance, transparency and accountability. The Defendant will not suffer any injury or prejudice if the information is released to the Plaintiff.”
The organization also argued that, “Unless the reliefs sought herein are granted, the Defendant will continue to be in breach of the Freedom of Information Act, and other statutory responsibilities. It is in the interest of justice to grant this application as the Defendant have nothing to lose if the application is granted.”
“As a key agency of government, the Ministry of Finance has a sacred duty to ensure that the country’s resources and wealth is used solely to fulfil the basic economic and social rights of all Nigerians and achieve the country’s overall socio-economic development. This implies providing strong leadership in the efforts to curb public sector corruption, and to refer to appropriate anticorruption agencies any allegations of corruption in which any agencies of government may be involved or officials of your Ministry may be complicit,” the organization also argued.
“Therefore, it is necessary to provide clarity as to what exactly happened to the missing N30tn if the Ministry of Finance is to continue to play a leadership role in the transparent and accountable management of the country’s resources and wealth, and to enjoy the public trust and confidence essential for the Ministry’s effectiveness and impact,” the organization further stated.
The organization is also seeking “a declaration that by virtue of the provisions of Section 4 (a) of the Freedom of Information Act 2011, the Defendant is under a binding legal obligation to provide the Plaintiff with up to date information relating to the spending of the alleged missing N30tn, which represents some accruable income to the Federal Government in the past four years including: a) any receipt, however described, arising from the operation of any law; b) any return, however described, arising from or in respect of any property held by the Government of the Federation; c) any return by way of interest on loans and dividends in respect of shares or interest held by the Government of the Federation in any company or statutory body.” [myad]