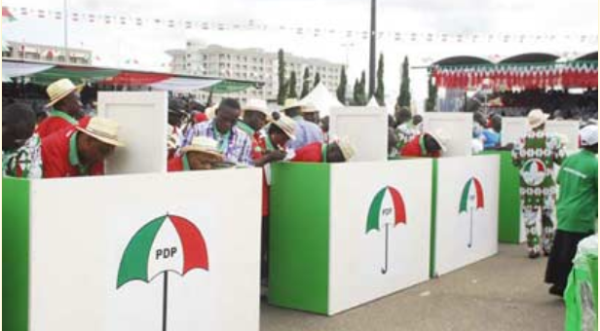 The Peoples Democratic Party (PDP) was thrown into chaos today, September 12, as members engaged in a free-for-all fight with delegates scampering in all directions for safety, leading to the postponement of the State Congress of the party.

Eye witness accounts said that trouble started when a former Deputy Leader in the House of Representatives, Alhaji Baba Agaie, was manhandled and whisked out of the venue of the congress by heavily armed security men.

This is even as the party’s secretariat in Minna was taken over by supporters of the two aspirants despite heavy security presence in the area.

In the midst of the confusion, members of the electoral committee, including its chairman, Mohammed Imam, were whisked away from the venue of the congress by security agents.

The committee later issued a statement announcing the postponement of the congress.

The statement read: “Due to uncertain security situation at the PDP state secretariat, venue of the rescheduled state congress, slated for today, September 12, the congress has been postponed.”

One of the delegates narrated how Agaie was beaten by some party faithful suspected to be from his own Agaie local government area.

The party supporters accused him of sabotaging their collective interest, alleging that he aligned with the former governor and leader of the party, Dr. Babangida Aliyu-led group.