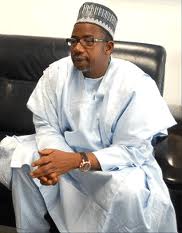 Minister of the Nigeria’s Federal Capital Territory (FCT), Senator Bala Mohammed is not happy with an online media organization (Pointblanknews.com) and already preparing to go to court to challenge what he called false and libelous reports it published against him, his children and the FCT Administration.

The media organization was said to have, in recent weeks, alleged that two children of the Minister whose names it gave as Ibrahim and Shamushdeen had stashed away a staggering N35billion in the Unity Bank and UBA Plc as well as an unnamed offshore account.

But, the Minister in a strong-worded petition to the Inspector-General of Police is calling for an investigation of the allegations which he dismissed as nothing but criminal fabrications by the authors.

He added that even the name of the minister’s first son, Shamsudeen was wrongly spelt as ‘Shamushdeen’ in the hatchet stories, even as he called on the Inspector–General not only to investigate the story but to interrogate the publisher.

“The Minister urged the Police boss to prevail on the media organization to disclose the full identities of the ‘Ibrahim’ and ‘Shamushdeen’ it referred to in its reports so that the people would be better informed.

“They should also be made to provide credible evidence of the bank account numbers to enable you carry out your investigation. I am insisting on these processes to prove my family’s innocence even though I know that the publishers have nothing to buttress their claims because the information upon which their stories were predicated is totally false, malicious and unsubstantiated.”

Odbuenyi quoted Senator Bala Mohammed as saying that his earlier appeal to the online media organizations to desist from publishing further negative reports against him and his children were rudely ignored, and that the publisher has not only failed to heed wise counsel by retracting the malicious story but has continued to do more false reports against him and his children. [myad]