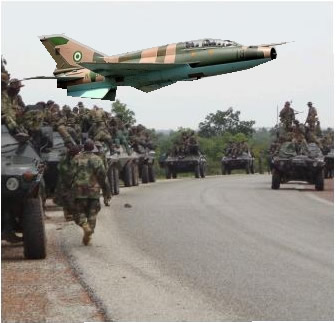 Nigerian troops are reported to be massing to launch an assault on the Boko Haram enclave in Sambisa forest to free hundreds of schoolgirls kidnapped whom they abducted from their school a fortnight ago, even as the Senate President, David Mark insisted on full military action against the sect as it is now clear that they are trying the will of the government and Nigerians.

It is believed that four battalions of troops have already been stationed at all corners of the forest, backed by fighter aircraft, helicopter gunships and police surveillance helicopters.

A large medical team with mobile clinics and air ambulances had also been sent to the area amid fears of casualties if and when an assault is launched.

Meanwhile, the Senate President, Senator David Mark has warned Boko Haram not to try the will of the federal government and the might of its military.

He said that by their continued refusal to release unconditionally, the over 200 students of Government Girls Secondary School, Chibok, who are still in their custody, they are inviting the full wrath of Nigerians.

In a statement in Abuja by his Chief Press Secretary,  Mr. Paul Mumeh, Senator Mark said: “they (Boko Haram members) have touched the hearts and souls of Nigerians by abducting and kidnapping our children. Children are our future. They have in effect, declared war on Nigeria and Nigerians.
“I have been an advocate for dialogue with the Boko haram elements in this country. But things have gone absolutely beyond bounds and nogovernment will negotiate with Boko haram as long as they keep our girls and our boys.
“They must free those they have abducted unconditionally. Nobody is going to negotiate with them on that basis.
“They must never test the will of the government. They must never test the might of the  Nigerian armed forces. Above all, they must never test the power of the Nigerian people because we must stand united against evil.

“They must have taken government decision to negotiate with them for weakness. They must not . Nigerian armed forces have performed creditably well across the globe.  They will do even better at home to preserve our unity and sovereignty”.
“We are not going to sit down and fold our hands. The federal government must intensify military action against the perpetrators and bring the issue of Boko Haram to a logical conclusion.
“The current situation in the country where some children have taken arms against their own country is totally unacceptable. Parents must share in the blame.”